An exciting excerpt from Indigo Incite, the first book in the Indigo Trilogy:

Without thinking, Liliana grabbed Tyler's pillow and swung her legs over the side of the bed, bringing her feet to rest on the rough, threadbare, motel carpet. Then, she silently made her way to the sofa and knelt on the floor. She lifted his arm and secured the pillow beneath it. With her hand still on his arm, she gave it a gentle squeeze and whispered, “Here ya go.”
“What’s this for?” he whispered back.
“Maybe I felt sorry for you.”
“Oh, so my trick worked? You bought my poor, poor, pitiful me story?”
“What?” Liliana snagged the pillow from under his arm and smacked it on his head. Then she turned toward her bed.
He laughed and then caught hold of her wrist to stop her. “I’m sorry,” he whispered. He tugged on her wrist to pull her down to the floor and then sat up on the sofa. He reached out for her other wrist and held both of her hands in his. The lighting was dim, but she could vaguely see that he had taken his shirt off. She could see the outline of his broad shoulders and muscular arms. His large hands held hers with a firm grip.
“I’m sorry,” he whispered again. “Everything I told you is true. Other than my brother, I have no family to speak of. And I swear I didn’t do anything wrong to get sent to military school.”
“Well, if you did something wrong, or not, it doesn’t matter to me.”
“It matters to me, that you believe me.”
“Why?”
“Because…I li—Because I’d like us to be friends.”
“I’d like us to be friends, too.” Liliana wondered what he had been going to say. Because I like you? She pushed the thought aside.
He squeezed her hands and then released them. “You’d better get some sleep.”
“You too.” She stood and said, “Sleep good…on the sofa.” She laughed softly and then hurried to crawl back under the warm blankets.
Sweet dreams, Tyler thought.
Same to you, she thought back. As she drifted off to sleep, visions of a shirtless Tyler, lying alone on the sofa, were the last images to float through her mind. 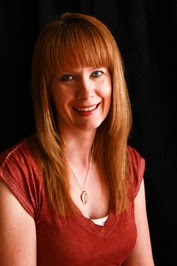 Jacinda Buchmann lives in Arizona with her husband and three children. She graduated from Carroll College, in Helena, Montana, with a B.A. in elementary education and later received a Master’s degree from Northern Arizona University, in school counseling. After spending several years as a teacher and later a school counselor, she now spends her time writing, any free chance she can get, that is, when she’s not spending  time with her family or creating a new concoction in the kitchen.


You can buy it on Amazon or Barnes & Noble, and check out the reviews on Goodreads.

Check out the tour-wide giveaway at the Rafflecopter link below.

Posted by Slee at 9:00 am
Email ThisBlogThis!Share to TwitterShare to FacebookShare to Pinterest
Labels: excerpts, Indigo Incite, Jacinda Buchmann, YA Fantasy