Good morning, lovelies! Today we have an excerpt of Arcadia by Jesi Lea Ryan, a series we featured earlier this month. Here's a bit of a reminder if you've forgotten, or haven't stopped by lately. 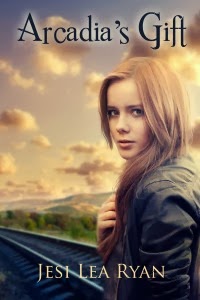 Most people who experience death don't live to tell about it. When sixteen year old Arcadia "Cady" Day wakes in a hospital after experiencing what can only be called a psychic episode, she finds her family in tatters. With her twin sister gone, her dad moved out, her mom's spiraling depression and her sister's boyfriend, Cane, barely able to look at her, the only bright spot in her life is Bryan Sullivan, the new guy in school. When Bryan's around, Cady can almost pretend she's a regular girl, living a regular life; when he's not, she's wracked with wild, inexplicable mood swings. As her home life crumbles and her emotional control slips away, Cady begins to suspect that her first psychic episode was just the beginning... 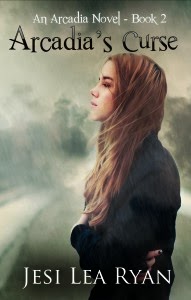 Think high school sucks? Try being an empath who has to experience everyone else’s suckage on top of your own. (Literally.) In the months since her family life imploded and her psychic gifts began to arise, Cady has struggled to figure out how she can fit into her normal life without going crazy from the constant presence of emotional energy. Her grades have tanked. Her best friend is afraid of her. And she begins to have doubts about why her boyfriend, Bryan, is really keeping her around. But a chance meeting with another gifted girl online opens up a whole new world of possibilities. Unfortunately, this new world comes at an awful price.

“Are we ever going to talk about it?”

We spoke at the same time, our eyes finally meeting, the pale green of his irises locked on mine like a trap. I couldn’t turn away. My breath caught in my throat. His hand moved to fall heavy on the shoulder of my down coat.

A fire lit in his expression as he ran his fingers down my arm and clutched my hand. His fingers were as cold as mine, but joined together they created kindled warmth. That warmth nudged on the mental barrier between us, trying to worm its way into my head. I was sure I would pay for it with a headache later.

His eyes shone with damp heat. “Cady, I can’t stop thinking about that night. About our kiss.”

“Not our kiss,” I said, yanking my hand out of his and struggling to stand up on stiff legs. “You kissed me. Big difference”

While that was true, we both knew I had kissed him back with a ferocity that stunned both of us, and the memory of which stung me with guilt whenever Bryan—my sweet, kind Bryan—brushed my lips with his.

“You don’t have to go,” Cane called, walking after me. “I’ll leave. I didn’t mean to ruin your birthday or your time with Lony.”

I stopped and turned to him. A shadow of shame and guilt clouded his face. It was the face of an angel, perfectly handsome and symmetrical. He was almost too beautiful to look at directly for fear of never getting his image off your burnt retinas. That shadow over his features looked grotesque and unnatural and immediately made me want to wipe it away.

“Cane,” I said, my voice breathy and low. “We can’t do this. I know how you feel about me. I don’t get why, but I know your feelings are real.”

“Even if I could hide how I feel from you, I wouldn’t want to.” 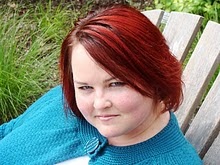 Jesi Lea Ryan grew up in the Mississippi River town of Dubuque, IA. She holds bachelor degrees in creative writing and literature and a masters degree in business. She considers herself a well-rounded nerd who can spend hours on the internet researching things like British history, anthropology of ancient people, geography of random parts of the world, bad tattoos and the paranormal. She currently lives in Madison, WI with her husband and two exceptionally naughty kitties. Stalk Jesi Lea here: Facebook/Twitter/Website/Blog

Thanks for featuring my book on your blog! I really appreciate it!