Today we're taking part in the HYBRID blog tour by chatting with author Venus Morales. Take a look at Venus's book and don't forget to enter the rafflecopter at the end of the post.


Hi, Venus! Welcome to We Do Write. Tell us about yourself.

Who is Venus Morales? I was raised in Boston, MA by my old fashion Latina grandmother. Where we lived in the projects my entire life. A life that wasn’t always peachy, but whose life is? My grandmother is the best grandmother anyone can ask for. She worked two jobs to put a roof over my head and food on the table.

My public local library is where I found my love for books. I knew at a young age I wanted to be a writer. When I introduced my work to my high school instructor I was praised for my creative writing and yet discouraged at the same time. I was told Latinos as myself would never make it in the literary industry let alone I was a female. I almost threw my writing dreams away, but something inside told me not to. A fire still burned within even though I was hurt, I continued to write discordantly.

Motherhood to three wonder boys took reign of my life leaving little to no time for myself or writing. As my boys continued to grow older demanding less of my time I started to write again, but there was never enough time in a day to do everything you want to do. I’m still a fulltime mother though they are not babies anymore, a mother’s job is never done. With the support from my family and friends I was grateful to complete my first novel ‘The Hybrid’ book 1. First of it’s series (The Hybrid Series). I am currently working on book 2 of ‘The Hybrid Blood and Darkness’ along with a new angel series ‘Trinity Angel of Wrath and Justice’. I plan to release those two in the near future but no date has been set yet.


Tell our readers about THE HYBRID. 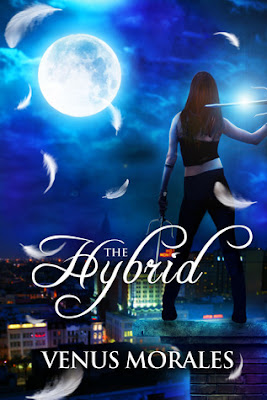 The Hybrid is about the God of Wars daughter, Arielis (Ari). She’s half goddess and half phoenacian, a fresh new mixed breed, mixed with a little Greek mythology. Ari is born with a dark prophecy hanging over her head. Meanwhile, Ares is forced to raise is motherless daughter in secrecy until her 18th birthday when he is summoned back to Olympus.
Ari chooses not to follow after her father and ventures out into the mortal realm. There, she is approached by an archangel Julius, who bears a message from a seer. Ari’s dark essence continuously struggles to consume her. She returns to the bayou to her late mother’s coven to regain her family crown. Little does she know she is fighting for more than the crown, she is fighting for her life. She has seven days to prepare for her trials, seven days to fight for her life. Ari does the one thing she know she must do to survive; she forges herself into the weapon she was born to be.
With a war hungry father, a vampire queen fashionista best friend, a Greek Goddess grandmother and an archangel by her side. Ari quickly finds out the truth about her past, future and dark secrets that have been kept from her by those she trusted.


Note…
‘The Hybrid’ is not your typical paranormal romance. It’s a young adult paranormal romance novel with fresh new breeds and non-traditional demons. I designed this novel bringing to life new breeds in a modern city, twisting your traditional demons into my own (deamonons). Some ask is it a typo, No it’s not. I’m a fictional writer, nothing I write is true or traditional. I will twist and mix up breeds and characters, stay outside the lines, it’s what authors do. I don’t want to be someone who stays within the lines I want to write what I find interesting. If we all were to write the same thing, we all would be reading the same stuff.
How did you come up with the idea for your story?


Honestly, it started off with me toying with a thought. I love Ares, the God of war. He’s the least favored Greek God and yet I find him so interesting. I kept playing with the thought of Ares and him having a daughter. But I knew I wanted something different. Not a full goddess or half human, something outside of the normal breeds we read. I think vampire are sexy and yet I love phoenixes, they are my #1 exotic immortal creatures. As I toyed with how I wanted to mix everything together the word phoenacian I could not get out of my head. So I decided to mix my two breeds together and making her the daughter of Ares, added another making Ari into a very complex hybrid. I intentionally made her a bit arrogant and angry, she had to be in order to reflect on who her father is. Once I made Ari, It was easier adding the rest of the supporting characters. Ily was her humor balance, Julius brought out her softer side, meanwhile Hera could control them all just by a glare. She’s big momma nobody wants to cross. I chose New Orleans for a couple reasons. It’s one of the best cities in the U.S. known for it’s voodoo and paranormal activity and also it’s my gem city. The one place I am in love with. If I could love there I would.


I am a bit of both. I not only write my stuff down in my notebook prior to transferring it over into my laptop, but when I do it helps me have a foundation of what I want to write and it starts to evolve on it’s own when I am transferring over.


What's the hardest part of writing for you?


It’s when I’m trying to get my thoughts clear. I can see what I want to write but it sometimes doesn’t come out right.


Geeze, I honestly couldn’t tell you. I google everything.


Finish this sentence: If I'm not writing, I'm probably ...
reading.


Thank you to WE Do Write for doing this interview. Thank you to Xpressbooktour, my family and friends and Creativia.

Thanks for hosting today! :)