Howdy! It's a brisk fall morning here in Pennsylvania and I couldn't be happier. Fall is my favorite time of year. Today we are joined by Lizzy Ford, author of OMEGA, a YA Dystopian novel that is soon to release. Here's a little bit about the book!

In a modern world ruled by territorial Greek gods, the human race has been oppressed, exploited and now, nearly destroyed by the constant infighting of gods. 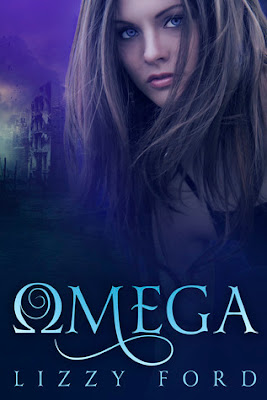 However, a human girl with the power of a goddess is coming of age. Alessandra is the Oracle of
Delphi – the last prophesized – and bears the mark of the double omega. Soon after she turns eighteen, Alessandra is told her destiny: to step between the warring gods and the human race and save her world from certain ruin.

For the gods, her appearance marks the beginning of the end – their end. They and the Triumvirate – leaders of the human elite – who serve them will stop at nothing to preserve their power.

Alessandra emerges from the forest where she spent her life hidden from gods and men and immediately plummets into a race against time, gods, and herself to discover who and what she is in a world where everyone she meets has a hidden agenda, and those pulling the strings remain in the shadows.

Before she can determine exactly what kind of savior her world needs, she must first master her power by completing three trials devised by the Triumvirate to enslave her.

One lone girl stands between warring gods and the people she’s destined to protect, but it’s the battle to understand who she is that she must win first.

Hi, Lizzy! Welcome to We Do Write. Tell us a bit about yourself.

Hi! I’m the author of over fifty titles and live in southern Arizona with my husband, three dogs and a cat! I’m a full time writer and love animals!

Tell our readers a bit about OMEGA.

Omega is about a kickass teen girl with a serious challenge. She’s the last Oracle of Delphi responsible for stopping the warring Greek gods from destroying humanity. She possesses the magic of a god but can’t access it until she passes three trials. Aside from grappling with this new world and getting a crash course in what powerful people will do to get what they want, she also has to figure out who to trust - and quickly, because the fate of everyone rests on her shoulders. The cast of characters includes the Silent Queen, High Priestess, Mercenary, Shadow Titan, Grotesque Prince, People’s Champion and the Supreme Magistrate!

In Las Vegas of all places! I was walking by Caesar’s Palace with my husband. There’s a gorgeous fountain outside the shopping mall there, and I started to think - what if we lived in a world where the Greek gods ruled? It’d be like our world as far as technology and the progression of (most!) history, but we’d be living in a place where fountains like this were common. What would it be like to live there?

My shih tzu, Wookie, which is more his requirement than mine! He always sits next to me on the couch when I write. I also have a mechanical/gamer’s keyboard, because it’s FAR better on my hands than the usual digital laptop/other keyboards. I can write longer with this kind of keyboard. And … water. I’m huge about drinking 3-ish liters of water a day. I feel best when I’m hydrated, so I always have a glass or bottle with me.

To be able to touch someone and take their darkness away. Having suffered through some really dark periods, I want to spare as many people as possible that kind of pain.

Hmmm … not sure. I google a lot of things, especially for my time travel series. Everything from where people went to the bathroom in the past to what their underwear looked like to what ancient civilizations used for contraceptives. There’s a lot of research that goes into writing any kind of historical fiction, even if it’s fantasy with time travel or my Highlander seillie book!

I always thank my husband for encouraging me to follow my dreams, my sister for handling the nuts-and-bolts of running a business on days when I’m moody enough to flip out if something bad happens, and my admin team: Lisa, Stephanie, Leanne, Nikki, Amy, Grace, and Gracie. They help me keep the empire running smoothly!

Thanks for stopping by the blog!

My pleasure! Thank you for having me!

Lizzy Ford is the award winning, internationally acclaimed author of over thirty five books written for young adult, new adult and adult romance readers, to include the internationally bestselling Rhyn Trilogy, Witchling Series and the War of Gods series. Considered a freak of nature by her peers for the ability to write and release a commercial quality novel in under a month, Lizzy has focused on keeping her readers happy by producing brilliant, gritty romances that remind people why true love is a trial worth enduring.

Thanks for being on the tour! :)