Today we're taking part in the RARE FORM blog tour, sneaking a peek at chapter eleven from this exciting new adult paranormal romance that just released yesterday! There's also a rafflecopter at the end of the post, so be sure to take part in that. But first, a little more about RARE FORM. 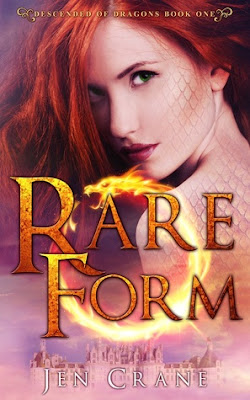 A Secret Past
Fiery redhead Stella Stonewall can’t decide between a margarita and a manhattan. The rest of her life? Please. Stella has never really fit in, and her pretty world comes crashing down when she learns it was never her world at all.

Rowan Gresham is domineering, brooding, and as sexy as chocolate-dipped sin. When he transports Stella to the magical realm of her parents she recognizes her rightful place immediately. Gresham’s motivations are less clear.

A Scorching Chemistry
The enigmatic Gresham aids in Stella’s metamorphosis and their chemistry ignites, though a long-time girlfriend and a significant age difference stand in the way.

A Battle for the Rest of Her Life
Stella’s life fast-tracks to extraordinary when she enrolls at Radix Citadel for Supernatural Learning, an enchanted college whose students turn furry on the regular. As Stella learns to navigate the magical new world of Thayer she must also find her animal form, a task as elusive as her ancestry. Stella soon faces an even greater challenge: staying alive long enough to learn to manipulate an animal form she never knew she possessed.

This was the moment we had been waiting for—to learn to reach that part of us linked directly to our evolutionary heritage.
Professor Martin held a stack of crisp white paper, and as he weaved between tables he distributed an individualized handout to each person in the class. He called out the surnames of the recipients. “Adder, Avenatio, Bartlet, Corleone, Durand…”
Damn alphabetical listings and an “S” name.
“…Redfern…” I had seen Boone, Layla, Ewan, Bex, and then finally Timbra all greedily snatch their stapled papers from the professor’s hand and devour its contents. I was dying to get my hands on mine.
“…Stonewall…” My heart stuttered to a stop and I sucked a breath in through my teeth. It took him 900 seconds to get to my desk, and when he finally got close enough I lifted off of my stool and snatched it right out of his hands. He probably gave me a censorious look, but I don’t know for sure because once I had the handout in my hands my gaze never left it. My whole identity could be revealed in the next second. All I had to do was turn the page.
The printouts were personalized for each student and listed family histories, genetic anomalies, and other information, as well as the name and contact information for each student’s advisor.
Many students shared advisors since genetic classifications intersected. Bex, for example, whose genetic ancestry was that of lions was paired—much to her obvious distaste—with another student whose family evolved from hyenas.
Likewise, Boone and Raynor shared an advisor since they both fell within the scientific suborder Caniformia. I had already learned of Raynor’s ancestry of seals. Boone, I was not surprised to learn, was descended of great dogs—ancient Greek Molossians.
“My ancestors chased the beasts of the forests,” Boone boasted. “How about you, Bristol?” he asked as he turned on his stool to face Ewan.
“My people are the beasts of the forests,” Ewan said menacingly. “You wanna have a go now?”
“Ah. No thanks,” Boone blew him off with a laugh and a shake of his head, ever the good-natured soul.
“And you, Stella? From what great line are your people descended?” Boone asked.
Of course he had no way to know that this subject was uncomfortable for me. I had not shared with anyone the enigma of my paternity; not even Timbra.
The paper was so starched that I had to lick my finger to flip to the second page. The cover whirred as I threw it over in search of my information.
Except for one line, my handout was blank. The only information listed?
Metamorphosis Advisor: Rowan Gresham
My heart plummeted to the pit of my stomach. I closed my eyes in defeat and anger and let out two or three breaths before I opened them again. I leaned to look at Timbra and Layla’s handouts to make sure that mine was, in fact, the anomaly. Of course it was. I knew I wouldn’t get any information about myself or my animal form that day. I never answered Boone’s question. I was so frustrated I couldn’t speak for fear of breaking out in tears.

AUTHOR BIO:
Though she grew up on a working cattle ranch, Jen Crane has been in love with fantasy and science fiction since seeing a bootleg tape of Quantum Leap in the 90’s.

She has a master’s degree, and solid work histories in government and non-profit administration. She’s been published in reputable newspapers and magazines.

One day, though, she said, “Life’s too real for nonfiction. I’m gonna write about love and magic.”

Jen is happily living out her dream in The South with her husband and three children, striking that delicate balance between inspiration and frustration.

Thanks so much, Dorothy!