Today we welcome author Blue Remy to chat about her book FROM HEL, WITH LOVE, published by Sapphire Star Publishing.

Hello, Blue! Tell us a bit about yourself. 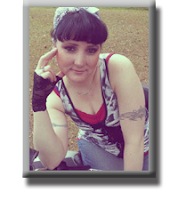 I don't like talking about myself at all. I'm not even sure where to start really. I'm Aquarius, I am the GM of a movie theatre, married for seven years. I happen to be a total WonderWoman geek and comic book nerd. I'm addicted to coffee and cupcakes.

Coffee and Cupcakes, I'm with you there! How long have you been writing?

Since I can remember. I really started focusing on my writing in high school, then I found AOL and Rhy'Din. I started writing there and have been hooked since.

Tell us about FROM HEL, WITH LOVE. What's the story about? 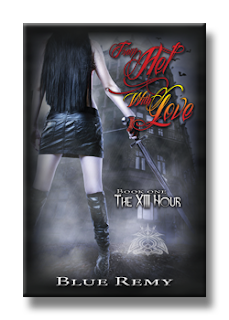 From Hel is really a stepping stone to The XIII Hour series. It is about a character named Raven Aquilus, who is a fallen Valkyrie, or a High Daemon, who runs the Nine Gates of Hell. The guardians that watch the Gates are being killed and she must figure out why. It introduces a plethora of characters and preternatural beings that other books in the series will focus on, though the series still revolves around Raven and her crew. Most of the books are based on faery tales, from the "evil" characters point of view. There is Queen Grimmhilde from Snow White, the big bad wolf from Red Riding Hood, Sheriff of Nottingham and Little John, even Guinevere. Here is the synopsis of From Hel, With Love:

All hell is breaking loose. High Daemon, Raven Aquilus, and her motley crew find out that the guardians of the Nine Gates of Hell are being murdered one by one, landing them in the middle of an ancient war between the Daemons and the Fae.

FBI Paranormal Agent Duncan O’Brien is brought in to investigate the brutal murders, but he is completely blind to the fact that he has landed in a High Daemon’s domain. Time is running out and Raven must enlist Duncan and his team to help discover the killer before she loses another one of her precious Guardians.

Duncan is the epitome of control, but even he is not immune to Raven’s beauty and magnetism. Raven is an enigma wrapped up in the body of lust, and attracted to a human. Both must fight their emotions to work together.

Raven faces losing everything from her life to a new found love in order to save the Underworld from being ruled by a jealous half breed.

I have been interested in theology since I was in High School, especially myths and legends. My grandmother introduced me to The Brothers Grimm and their faery tales, and I was hooked. My twisted brain came up with the idea of mixing it all and coming up with Raven, then with her back ground, adding history and other goodies... BAM! The XIII Hour was born.

Yikes, both? Raven is hard to plan. I pen out everything first, then I start transposing it to the computer. Raven is so bipolar and psychotic, it never turns out how I had it planned.

Honestly? -laughs- Sex scenes. I don't do sexy. I'm a total TomBoy. You should have seen me freaking out when I wrote the scene in From Hell. I sent it to a good friend of mine who writes erotica and when she told me I made her tingle, I know my jaw dropped to the floor. It's the hardest thing ever for me to write.

*craves coffee* *and cupcakes* If you could have any super power, what would it be?

Oh wow, there's totally too many to even contemplate having... Comic book geek, remember?

Uhm, uhh ... You got me there. Everything I google seems normal to me. I google WonderWoman stuff, Living Dead Dolls, I googled tiara's before, since I wanted one. Which I own now, since I'm Sapphire Star's Dark Princess ;-)

Awesome! Quick writing test! Use the following words in a sentence: exhausted, flippant, and flip chart.

Raven is always flippant when she gets exhausted, to the point of taking a flip chart to prop her up on the bar.

LOL! Here’s the part where you thank the people who are supporting you. Let's hear your shout outs.

Sapphire Star, of course. With out them, I wouldn't be here. They saw something in Raven (I think they're scared of her lol) and Amy & Katie for putting up with my kazillion phone calls, Amy Gregory - Because she has put up with so much of my venting with the book, and the fact she actually critiqued some of it and she doesn't read my genre. Charity Parkerson - if it wasn't for her pushing me to get From Hel out there, I never would have approached SSP, she is a huge reason why I'm even exposed. My hubby - He pushes me when I need it, he listens to my ideas and lets me know if they suck or to roll with it, and he tells me all the law enforcement info that I need to cover characters and things I need to research.

Thanks so much for chatting with us today, Blue. Your book sounds amazing, I can't wait to read it!
Posted by Dorothy Dreyer at 5:51 am
Email ThisBlogThis!Share to TwitterShare to FacebookShare to Pinterest
Labels: Blue Remy, demons, From Hel with Love, paranormal fiction, paranormal thriller, Sapphire Star Publishing, The XIII Hour Series