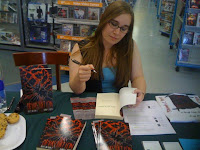 I’m 23 years old. I live in Kansas. I’ve been married for five years and am a childcare Director by day and a writer by night. I do not have any children unless you consider my two adorable pug babies who like to keep me company.

For a very long time! I’ve always written. I guess since I could read I was writing stories. I wrote my first full manuscript (180 pages!) when I was 12. It has always been my passion.

Tell us about ISOLATION. What’s the story about? 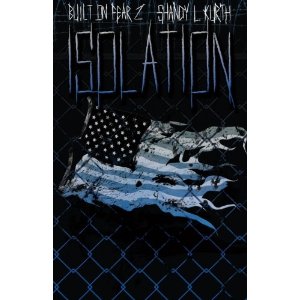 Isolation is the second book in my Built on Fear series. It follows a group of kids after they reach ‘The Safe Zone’ which is an area barricaded and fortified by the US government after a foreign enemy comes in and devastates the entire northern states of America. In Isolation, the characters grow and you begin to see how their strength of character, even in the most isolating and terrifying of circumstances, is what being an adult is all about. It is an intense story of loyalty, friendship and allegiance as they go to war, with the enemy and with themselves.

Book 1, Devastation actually came to me through my husband! I was sitting there one day, after finishing a manuscript, and I just felt like I had written the same book several times so I said to my husband, “Give me something to write about. I need something new.” And he said, “A war with (BLANK).” (I won’t spoil for those who have not read Devastation) And I ran with that! Isolation is a continuation of that story because when I got to the end of Devastation I WANTED to know what was going to happen to these kids and so, of that came Isolation.

Pantser all the way! Funny because in real life I am a hard core planner but not with writing. It floods out of me, and I let it. I discover it as it finds its way to the screen of my laptop.

Ending it. A story is never really over, is it? So where is that cut off point?

Nothing. Haha, I can write any time anywhere, on a computer, in a notebook, with pen, with a marker, with a crayon, on my couch, at a desk, on the floor or on the beach. If I need to write, then I write. It doesn’t matter where I am.

To fly. I would love to see the world from a completely different view!

Ekk, I can’t say because it may give away an important key in Isolation! ;) You’ll have to read the book!

Quick writing test! Use the following words in a sentence: isolation, party, and ladybug.

With the strength of a full grown grasshopper, the ladybug wrestled the wasp into a room of complete isolation to keep him from crashing the party!

Isolation will be released October of this year on Amazon, Barnes and Noble, Kobo and apple in ebook format as well on Amazon in paperback!

Thanks so much for stopping by the blog, Shandy! Good luck with your series!

Thank you so much for taking the time to chat with me!
Posted by Dorothy Dreyer at 2:59 pm
Email ThisBlogThis!Share to TwitterShare to FacebookShare to Pinterest
Labels: Built on Fear, Devastation, Isolation, Shandy Kurth