Hi, Nancy, welcome to We Do Write! Tell us a bit about yourself.

Well, I lived most of my life in the San Francisco Bay Area, but eight years ago, my family moved to the Seattle Puget Sound Area. I’m married to my “high school sweetheart” though we didn’t actually meet in high school. We have one son, age 17, who is just starting his freshman year at Arizona State University. And although I am an interior/architectural designer and have run my own business since 1997, my new passion and focus is writing.

Unlike most writers I know, I never had that lifelong passion to write, though I’ve always loved to do it. I was bitten by the bug in March 2010, in one moment of divine inspiration.

Tell us about THE MISTAKEN. What's the story about?

It’s basically a story of revenge gone horribly wrong, but it’s also about a man who desperately wants to free his brother from the muck and mire of San Francisco’s Russian Mafia. 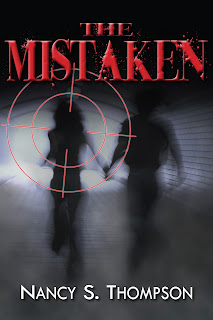 All Tyler Karras wants is to enjoy life with his expectant bride; what he gets instead is a graveside seat at her funeral. With the woman who killed her uncharged and still free, all Ty wants now is revenge.

His brother, Nick, has dangerous connections and suggests a sadistic plan: grab the woman responsible and hand her over to his associates—sex-traffickers in San Francisco’s Russian Mafia. They offer Ty more than he dreamed possible. In exchange for the woman, they’ll finally let his brother leave the business for good—with his debt wiped clean and his heart still beating.

Now he must protect Hannah Maguire from the very enemy he's unleashed, but the Russians are holding Nick as leverage to force Ty to complete their deal. Caught in a no-win situation, Ty must find a way to save himself, his brother, and the woman, but with the Russian Mafia, even two out of three makes for very long odds.

Sounds like an exciting read! How did the idea of the story come to you?

It came to me while driving around in my convertible on a rare sunny Seattle afternoon. A new song I had recently downloaded onto my iPod, Hurricane by 30 Seconds To Mars, began to play, and I was struck by the lyrics: “Tell me, would you kill to save a life, would you kill to prove you’re right?” When I heard that, I wondered, what could make a good man do something truly awful, and could he ever find his way back to the man he use to be? From there, a story was borne. I used elements and experiences from my past to mold the story, but it’s all fiction.

Great inspiration! Are you a planner or a pantser?

This is a difficult question. I used to think I was a hardcore plotter because I wrote an extensive outline before I ever sat down at my computer and started typing. But now I’m thinking I’m actually a pantser because that outline was really more of a first draft, albeit handwritten and incomplete without dialogue, setting, or detail, but still, a first draft. So while I did constantly jot down notes, my story—which came to me whole—was first written in a stream-of-consciousness format, so I think that actually makes me a pantser.

Hm, well, I don’t think there is a hard part for me really, at least not for The Mistaken. The story poured out of me in a few short weeks. Now that I’m writing my second book, I find that while the story came to me nearly whole, it’s not quite as fleshed out as The Mistaken was, so I would say, at this point, just completing the story concept and plot. But for the most part, writing comes to me pretty easily. I even love revising. It’s everything else that I find difficult, like blogging, building a platform, and all the publishing stuff. It kind of gets in the way of the writing.

I need my notes, what I’ve always called my outline, but what is really that handwritten first draft. It’s my roadmap. Second to that, I need the TV on, but turned down low so I can hear it, but not quite understand what is being said. I can’t stand a quiet house.

I’ve always wanted to fly, but that’s not very practical and I am a practical girl, so I’d have to go with invisibility. That would enable me to insert myself into any situation and just soak in the intrigue and drama of all that is going on around me. I could go anywhere and learn anything and no one would be any wiser. How cool is that?

Of all time? Geez, that’s hard to say, but recently I Googled whether or not the hotel room doors at the Four Seasons San Francisco have peep holes. (They do.) Not too exciting, I know.

Quick writing test! Use the following words in a sentence: Oreos, competition, and deflated.

With the competition over, and her shoulders deflated in loss, Marie stepped off the stage risers and trudged away, her only consolation, the lone Oreo left in her hand.

LOL, well at least she's got that. ;) Here’s the part where you thank the people who are supporting you. Let's hear your shout outs.

Of course, my greatest thanks go out to my husband and son who allowed me this crazy obsession of writing this book. I also need to thank Katie Henson and Amy Lichtenhan at Sapphire Star Publishing for believing in me and my story, and for giving me such an awesome opportunity. But more than anyone, I want to thank author Lisa Regan. She started off as a critique partner and turned into my closest friend and ally. More than that, she taught me almost everything I know about writing, and whipped my book into publishable shape. Without her, I’d be nowhere.

The Mistaken will be released via Amazon on October 18, 2012, where you can get either the trade paperback or the e-book version. As for me, you can find and follow me on my blog, on Twitter and Facebook, or on Goodreads where my book, The Mistaken, also has its own page. I’m also on the Sapphire Star Publishing website.
Posted by Dorothy Dreyer at 6:00 am
Email ThisBlogThis!Share to TwitterShare to FacebookShare to Pinterest
Labels: Nancy S Thompson, Sapphire Star Publishing, The Mistaken, thriller