Welcome to We Do Write, Jayce. Tell us a bit about yourself.

Aw, I'm just a regular joe. I grew up in rural areas of the south and midwest, and loved to read for as long as I can remember. But during the summer of my 15th year, something happened...I don't know...but suddenly I became an insatiable reader. I set a goal to read at least 100 books a year, and I actually met that goal for six straight years. It was a great help to be surrounded by loved ones who also loved to read. I know that many of my beliefs and attitudes were shaped during that time. I know for a fact that it was the concepts that I encountered in books that alerted me to the injustice of racial prejudice. I felt enlightened in a time and place where such was an accepted behavior--and I learned the power of the pen for conveying ideas.... Now I'm over 50, a celibate widower for more than a decade, with two grown children, and two growing cats.

Well, I wrote some poetry as a small child, but my first short story was written for a class project in high school that would be a major part of our final grade in this particular class. The instructor gave us certain criteria which had to be incorporated into it, but it was up to each student to do so as he or she saw fit. It was my first lesson in how the characters can take a story over. Most of my classmates produced 10 or 20 pages of text, but I couldn't seem to find a stopping place! I kept asking my teacher for more time, and she granted it--with the stipulation that she would have to count points off my grade for being overdue. And, boy, was I overdue! I turned my 94-page story in four weeks late. My grade was 99 out of 100--1 point off for tardiness.... I still take pride in that to this day.

More short stories followed. Then I wrote an entire novel with my best friend when we were just 20 years old. Nothing was published, though, and "life" sort directed me away from writing for many years. Then, in 2007, I began writing XIANNE....

Tell us about XIANNE. What's the story about? 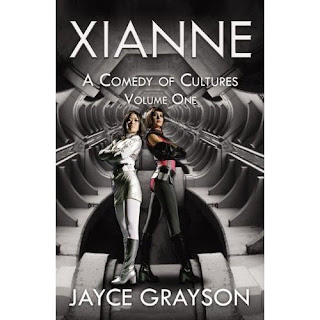 Well, first and foremost, XIANNE is my personal tribute to my favorite author, Robert A. Heinlein. The good thing, however, is that readers do not have to be aware of him nor his writings to enjoy the book. I know this to be a fact because almost none of my reviewers have remarked on that facet of the novel at all. And that's good because I had hoped to be able to make it an unobtrusive "bonus" for other Heinlein fans like myself.

Secondly, XIANNE is a speculative look at where our ever-changing society is taking us, especially in regards to how acceptable Pornography is becoming in the mainstream. What will our culture be like in 300 years? Think of the social taboos of 300 years ago, but how we view those ideas today--In the future, it will be the same with the lines we've drawn in the present--in fact, many of those lines are being erased even as this interview is being conducted! What was shocking behavior three centuries ago, is laughably accepted--even encouraged--today. Do not think that the same won't be true of our taboos, three centuries from now--and, more likely, much sooner....

And yet, for every action there is an equal and opposite reaction... Amid the sexual glut of the 24th century, there arises a "new orientation"... Not Straight, not Bi, Not Gay...but NAY.... "Nay", from the entry of N/A--"not applicable"--on the "Ask/Tell" or sexual orientation question. People with no sexual preference...in the face of ubiquitous sexuality.... And yet, products themselves of that society. This will be demonstrated in microcosm aboard the interplanetary freighter/luxury yacht XIANNE, where we will see how such diverse personalities interact.


How did the idea of the story come to you?

LOL. What's the hardest part of writing for you?

Writing. I mean it--ideas come, I'm inspired, but it just seems like a horrible grind, getting the words actually put down.

Mind Control. Other people's minds--mine has already gone over the cliff.

That's my choice too! ;) What's the weirdest thing you've googled?

"Super Hot Androgynous Guys". Though, that isn't all that weird, I guess...to me, at least....

Quick writing test! Use the following words in a sentence: rifle, tangerine, and pollen.

She lay back, allowing him to watch the rivulet of tangerine juice as it traversed the valley between her breasts, dodged the indentation of her navel, at last arriving like liquid pollen upon the petals of her bare womanhood--and he, a loaded rifle!

Youch, that's not exactly PG13, is it? Finish this sentence: If I'm not writing, I'm probably...

Here's the part where you thank the people who are supporting you. Let's hear your shout outs.

There are far too many to start showing that kind of favoritism--none of them will mind, however, if I single out my daughter and my son...as well as the enduring and ever-inspiring memory of their mother....

I have a new author page on Facebook. http://www.facebook.com./pages/Jayce-Grayson-Author/315536508543088?ref=stream and My novel can be found, among many other places, on Amazon. http://www.amazon.com/Xianne-Comedy-Cultures-Jayce-Grayson/dp/0741464721/ref=sr_1_1?s=books&ie=UTF8&qid=1326862134&sr=1-1
Posted by Dorothy Dreyer at 7:02 pm
Email ThisBlogThis!Share to TwitterShare to FacebookShare to Pinterest
Labels: Jayce Grayson, speculative fiction, Xianne

Into the mind of Jayce Grayson...what a scary, awesome place to be. I loved the interview. I always imagined you with bandages wrapped around your head lol. -Cynthia

Comes with being horribly disfigured...and a little shy....

Man... I give a good interview.