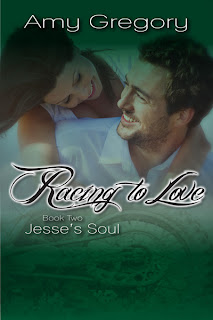 Jesse Frost lived the life most men would kill for.  Fast bikes, fame, money and good looks.  However, he wasn’t a man that gave as much thought to that as most.  Jesse was just an easy-going guy from a small speck of a town in Texas, a guy that worked hard for everything he had achieved in life.  When everything else seemed to go his way, it was women that left him disheartened, and finding the right one always seemed to be just out of his grasp.  After a run-in with his high-school crush left him even more confused and emptier than ever before, he had decided he would never find the type of love his best friend Carter had with Molly.
Emery Kincaid had a last name that was revered in their world.  Born into a world of gas, grease and speed, she was a woman in a man’s world, but she grew up more comfortable with a wrench in her hand than a doll.  Irish through and through, she has the temper and sass to boot, and a reputation that precedes her.  Determined to carry-on her family’s legacy, despite the chromosomes she was born with, she works harder than any man she’s come across and never backs down.  However, things aren’t always what they seem.  Emery had remained strong because she’s had no other choice, but the pain she masks runs deep and hiding it is the only way she can survive.
Thrown together by circumstance, and forced to be in each other’s space day in and day out, sparks start to fly—from chemistry and the brakes Emery desperately tries to throw on.  Without a doubt in his mind, Jesse knows he has finally found her, but the girl that stole his heart has a stubborn streak a country mile wide.
What Emery doesn’t realize about Jesse is that he’s a competitive guy, by nature and by profession, and he has no intentions of letting her slip through his fingers.  Not when she is the first woman to understand him, to appreciate his dedication to his career and well, the fact that she’s beautiful is just the icing on the cake in his mind.  It is what Jesse doesn’t know that could break his gentle heart.  Hiding her true feelings for him is the only way for Emery to protect him, and in turn—herself.  She barely made it out the first time.  If she lets Jesse in and he walked away well, that’s a risk her heart can’t take.

Thank you so much Dorothy for allowing me to visit your blog!!! I greatly appreciate it sweetie!
Hugs,
A

Always a pleasure having you, Amy!

This sounds like a good one~ thanks for the review! Such a cute couple-pose on the cover, too :)

Thanks for stopping by, Jess :)