Cover Reveal: Secrets of the Moon by Kristy Centeno

Happy Friday everyone! I'm so glad it's the weekend, aren't you? Of course you are. Then let's kick off the weekend with a cover reveal. We present to you the cover of SECRETS OF THE MOON by Kristy Centeno. 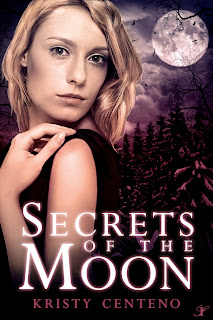 Teenager Marjorie Emery eluded death. As she struggles to get her life back on track, she believes her efforts are paying off. Yet, when a black dressing, unfriendly, and incredibly handsome hottie walks into her classroom, she’s forced into a tailspin. Marjorie has no idea how much his presence is going to shatter what little tranquility she’s achieved.
Kyran Rousseau’s gloomy nature has a name, one that is potentially fatal under the right circumstances. His family harbors secrets and does everything to protect Kyran. While, he does’t want to ruin Marjorie’s normal life, love has a way of changing his plans.
Falling for Kyran is the least of Marjorie’s worries. With a faceless threat hunting her and a boyfriend who's as dangerous as he is good looking—how can Marjorie and Kyran keep all hell from breaking loose before it’s too late?
Genre: Young Adult
Release Date: 7th July, 2013
Author: Kristy Centano
About the Author:

As a child, Kristy used to lose herself in an imaginary world by the means of a good book. Now that she’s all grown up, she gets to create her own fictional realms and make them come to life in ways that most readers might not expect.
Writing has always been a passion of hers but she never had the opportunity do so until now. After trying out numerous options, she realized that writing was what she loved the most and so she decided to give it a shot. As it turns out, her very active imagination helped her achieve her goals of creating believable plots with some ordinary, and some not so ordinary characters that move the stories along in one way or another.
As she keeps achieving her dreams of becoming a published author, she divides her time in between four children and a very understanding husband.
http://kristycenteno.com
http://booksbycenteno.com
www.twitter.com/KrissyGirl122

Posted by Dorothy Dreyer at 7:52 pm
Email ThisBlogThis!Share to TwitterShare to FacebookShare to Pinterest
Labels: cover reveal, Kristy Centeno, Secrets of the Moon, YA Paranormal