Interview with B Lloyd 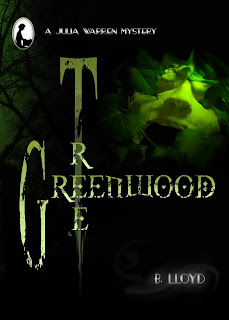 Today we're talking with author B. Lloyd about her novel, GREENWOOD TREE. B. Lloyd describes herself as "A bustle attached to a keyboard, occasionally to be seen floating on a canal ..." Let's say hello.

Welcome to We Do Write! How long have you been writing?
Since I was a child, really: I have never stopped scribbling - although rarely finishing ! I have got a bit better since then …

Tell us about GREENWOOD TREE. What’s the story about?

It’s probably best if I give you the blurb:

‘Well, what do all mysteries have?' said Aunt Isobel. 'Money, mistresses, and murder.’1783 – and Lichfield society is enthralled by the arrival of dashing ex-officer Orville; he charms his way into the salons, grand houses and even a great inheritance from extrovert Sir Morton. 1927 – and detective writer Julia Warren returns to her home in Lichfield to work on her next novel. Initially she hopes to find plot material from the past and set it in the present. Aunt Isobel, while making preparations for the annual midsummer ball, has managed to root out an old journal from 1783 which might prove a source of inspiration. Once Julia starts reading her ancestor’s journal she becomes absorbed in solving the mystery surrounding officer Orville. Detective fever takes over, and she moves from reality to legend as events from the past seem set to re-enact themselves in the present, and she finds herself unravelling more than just the one mystery. Who was Orville? Who was the agent, Oddman, set to spy on him? And who is helpful Mr Grenall ? Pagan gods don’t walk away just because you stop looking at them. The Gronny Patch sleeps. Perhaps it dreams. Or perhaps not …

Originally it started with a competition – the point being that the novel had to be set in Lichfield; once I discovered the connection with the Green Man, it was not long before there were images dancing in my head, crowded with scenes from the time of Dr Johnson and Garrick…and I wanted the 1920s in it as well, being the Golden Age of crime fiction. (Greenwood Tree is, after all, a mystery novel). And so it grew; it outgrew the competition and continued to develop

Both, in that I do go over my work, and I have also joined or tried out various online writing communities; the most well-known of these probably being the Harper Collins site Authonomy.com

It varies; it depends also on the individual story; some write themselves with only minor hiccoughs – others I like to outline, quite minutely. Whatever I do, however, the story will take over and decide for itself what it wants.

Probably filling in the bits inbetween ! I actually can’t think of a particularly hard part; there is something in every part of it from which to derive some sort of  satisfaction …

Lots and lots of colourful, cheap notebooks – usually those medium sized ones for schools; easy to slip into my shoulder bag.

Hummmm… often wonder what it would be like to be able to communicate with animals and birds; as in, hold a conversation – I might have a story line bubbling in there, somewhere …

Hmm – there may have been so many I have lost count …steampunk guinea pigs ? clockwork peacocks? 18th century shoe polish ? (these are a few of my favourite things…)

Quick writing test! Use the following words in a sentence: forest, reputation, and spite.

‘The remaining forest that covers the Carso above the city of Trieste has the reputation of being the abode of the wind goddess Bora, who courses through the hills and towns, venting her spite on mortals for having cut down the trees that made up her home ….’


Finish this sentence: If I'm not writing, I'm probably …

V.R.Christensen, Shalini Boland, Lynn Clayton, Louise Galvin, Gev Sweeney, Andrew Meek,and many, many more - and most of all the team at Grey Cells Press, headed by Robert Peett, whose advice, perception and culture have had invaluable influences on preparing Greenwood Tree for publication.

Posted by Dorothy Dreyer at 4:51 pm
Email ThisBlogThis!Share to TwitterShare to FacebookShare to Pinterest
Labels: B Lloyd, Greenwood Tree, murder