It's cold, raining, snowing and sleeting and I just spent the last four hours fighting people at the grocery store. Between the holiday this weekend (Thanksgiving, for those of you not in the U.S.) and the mass hysteria that a little rain mixed with snow equals the apocalypse, insane people have flocked to the stores in droves. They're stocking up on the mandatory toilet paper, kitty litter, milk, and, due to the holiday, turkey, stuffing and booze.

Needless to say, it was a madhouse. Which is why I am so glad to come home, curl up with a cup of hot cocoa, and share with you this fabulous book trailer for the award winning AN UNLIKELY GODDESS by Mohana Rajakumar. 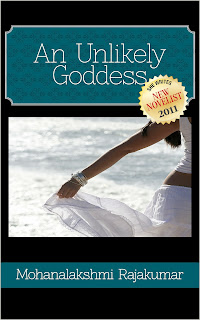 Sita is the firstborn, but since she is a female child, her birth makes life difficult for her mother who is
expected to produce a son. From the start, Sita finds herself in a culture hostile to her, but her irrepressible personality won’t be subdued. Born in India, she immigrants as a toddler to the U.S. with her parents after the birth of her much anticipated younger brother.

Sita shifts between the vastly different worlds of her WASP dominated school and her father’s insular traditional home. Her journey takes us beneath tales of successful middle class Indians who immigrated to the U.S. in the 1980s.

The gap between positive stereotypes of South Asian immigrants and the reality of Sita's family, who are struggling to stay above the poverty line is a relatively new theme for Indian literature in English.

Sita's struggles to be American and yet herself, take us deeper into understanding the dilemmas of first generation children, and how religion and culture define women.

Posted by Elizabeth Holloway at 6:02 pm
Email ThisBlogThis!Share to TwitterShare to FacebookShare to Pinterest
Labels: An Unlikely Goddess, book trailer, Mohana Rajakumar, YA Contemporary, YA Multicultural