Guest Post: Why I Love Genre Mash-ups, by Krystle Jones

TGIF! And to celebrate the end of the work week, and the beginning of a four day weekend for me (not that it matters to you, in any way, but I'M stoked :-)), we have Krystle Jones here to discuss why she loves genre mash-ups.

But first, Krysle's YA Paranormal Romance/Urban Fantasy, THE RED SECTOR CHRONICLES, is now available! Here's a little about the story. 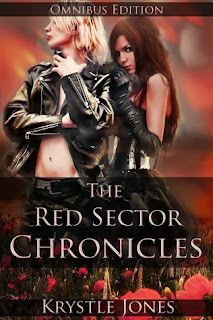 The strength of Sloane’s heart is about to be put to the ultimate test.

After the Eclipse – the night vampires began openly slaughtering human victims – everything changed. Out of fear, the government salvaged what remained of the human population and enclosed them in massive, security-laden cities called White Sectors, while marking the vampire infested territory as Red Sectors.

When seventeen-year-old Sloane McAllister’s twin brother disappears, she seems to be the only one who thinks he isn’t dead, and she vows to stop at nothing to find him. Gathering her courage, she braves the Red Sector to search for clues to his whereabouts. By chance, she encounters Aden, a handsome, charismatic vampire with a hidden agenda. He turns Sloane against her will and whisks her away to his underground city. Enemies quickly become friends as Sloane struggles against her attraction to Aden, and resists her growing loyalties to the creatures that ruined her life.

But the vampires themselves are the least of her problems. A war is brewing between the humans and vampires, along with a growing web of deceit and betrayal. And before it’s all over, loyalties will be tested, hearts will be broken, and no one’s lives will ever be the same.

Why I Love Genre Mash-Ups
By
Krystle Jones

It’s not enough for me to write in one genre – I have to have 3-4 in my novels. Okay, maybe that’s a bit excessive. I try to stick to no more than three, because otherwise, you might not please any readers if they go in expecting one thing out of a book and find out it’s something totally different. But I do think a lot of books have one predominant genre and one or two supporting genres, and to me, that adds more richness to the story.

I think maybe my love for genre mash-ups comes from my love of a bunch of different genres. I love to read – and write – soft sci-fi, epic fantasy, horror, contemporary love stories, urban fantasy, paranormal romance, and so on. As long as it entertains me, I’ll give it a shot. My “favorites” shelf is filled with books from a bunch of different genres, and a little bit of that leaks out of me when I write, I think.

Though I wasn’t thinking about it at the time, there’s also a good marketing aspect to mashing up genres in your stories. I didn’t fully realize this until I came across this article about Charlaine Harris’s Sookie books. (Sorry, can’t remember the name of the article!) If you’ve read the Sookie books, they have a blend of cozy mystery, paranormal romance, and urban fantasy. As a result, Charlaine pulled in readers from not one, but three different genre pools, thus increasing her audience. Her publisher sends her to book conventions ranging from romance, to sci-fi/fantasy, to mysteries. Needless to say based on her success, the genre-mashing thing isn’t all bad. =)

On the off-hand, genre-mashing can backfire if the “feel” of the story is too weird for the audience to grasp. Genres are there for a reason, and I think each genre has its own feel. It’s jarring when you’re reading along, and all of a sudden, the story veers off into a totally different genre. It can change the whole atmosphere of the story, and make it a bit like wading through mud trying to finish it. So if you’re going to genre-mash, take care to make sure one genre stays predominant, your “main flavor.” Let the others be your seasoning.

Krystle Jones was born and raised in the small, southern town of Tullahoma, Tennessee. Reading and writing have been lifelong passions of hers. In addition to being a novelist, she is also an award-winning flutist, and moonlights as a voice actress. Her voice can be heard in the popular online game, Alice is Dead 3.