Yes, it's Friday! I don't know about you, but I feel like this week has gone on forever. To celebrate the end of the week and the start of the weekend, let's indulge ourselves in a nice interview with author Holli Anderson.

Hi, Holli! Welcome to We Do Write! Tell us a bit about yourself.

I have a Bachelor’s Degree in Nursing—which has nothing to do with writing, except maybe by adding some pretty descriptive injury and vomit scenes to my books. I enjoy reading any book I get my hands on, but have a particular love for anything fantasy.

Along with my husband, Steve, and our four sons, I live in —the same small town in which I grew up.

I have actually only been writing for just over six years. I discovered during a rough time in my life that writing takes me out of this world and I find a lot of peace there. 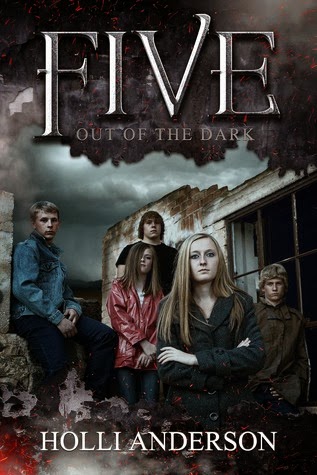 Tell us about FIVE - OUT OF THE DARK. What’s the story about?

Five is about 5 teenagers that find out they have magical abilities—they have no idea where these abilities came from or how to use them. The Five have never met, but all end up having to leave home for different reasons. They are all drawn to the Seattle Underground, where they meet up and start living and practicing their magic together. They soon discover that the world is full of monsters thought to only exist in nightmares, but most people can’t see them. The Five become protectors of the unsuspecting humans and find themselves back in high school, pitted against an evil principal who isn’t what he seems.

There is a budding romance between sixteen year old Paige and seventeen year old Johnathan—until Johnathan gets bitten by a changeling. The bite transforms him into a ravening beast once a month—which is much easier to deal with than the day-to-day havoc the venom is wreaking on his emotional stability.

As the Five deal with the evil that has infiltrated the high school, Paige vows to find a way to cure Johnathan—no matter what it takes.

How did the idea of the story come to you?
I had a very vivid dream one night that involved a group of teenagers in an underground setting. They were fighting with some adults who were trying to take over their dilapidated home. That’s where the idea started and my imagination took it from there.

Do you have a critique group/partner or beta readers, or do you self-edit?
I have an awesome critique group who are always the first to read my stories. We keep our group fairly small—only 5 or 6 members, and we meet once a month.

Are you a plotter or a pantser?
Pantser. I love letting the story tell itself. I love being surprised by unexpected turns—this happens even though I’m the one writing the story.

What do you absolutely have to have nearby when writing?
I have to have a drink—either water or Diet Dr. Pepper—nearby. Also, music. I listen to hours of Pandora while I’m writing, I change stations to fit with the scenes I’m writing.

What are you reading right now?
I’m reading The Enchanter Heir by Cinda Williams Chima.

If you could have any super power, what would it be?
The power to Heal. I’m an ER nurse by day and it would be amazing to be able to heal people’s injuries and illnesses with the touch of my hands.

Quick writing test! Use the following words in a sentence: flashlight, contemplating, and firefly.
He was seriously contemplating how he could capture the ginormous firefly to use as a flashlight before he descended into the blackness of the abandoned mine.

Finish this sentence: If I'm not writing, I'm probably ...
Watching my teenage boys play sports while I daydream about writing.

Here’s the part where you thank the people who are supporting you. Let's hear your shout outs.
First and foremost I want to thank my amazing husband, Steve. His support and excitement for my work are unbelievable. My four boys are an inspiration to me and my writing—Riley, Wayne, Alec, and Seth have given so many things to write about! And, my publisher, Curiosity Quills Press. They have been nothing short of wonderful to work with.

And finally, where can people find you and your books online?
They can find me on Facebook at Author Holli Anderson, on Twitter @HaAuthor, on Goodreads, and on my website at holli-anderson.com.


My books can be found on Amazon.com, Barnes & Noble, , Kobo, and probably some other places I don’t know about.

Posted by Dorothy Dreyer at 12:58 pm
Email ThisBlogThis!Share to TwitterShare to FacebookShare to Pinterest
Labels: Five Out of the Dark, Holli Anderson, YA Paranormal

Great interview, ladies! I have never tasted a Dr Pepper haha. I know right? I don't think it's very common here in Canada or at least I've never really noticed them in stores. I will buy one when I do!!

Thanks for being part of the blog tour. I loved your interview questions.

The above anonymous was me, Holli Anderson. :)