Have you got some room on that book shelf? Well, start making space, because tomorrow there are seven awesome book releasing! Just take a look at all these goodies. 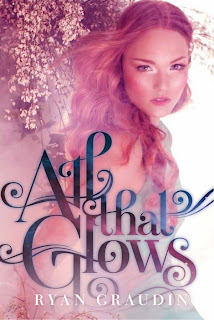 ALL THAT GLOWS
by Ryan Graudin
Publisher: Harper Teen
Amazon, B&N, Goodreads
--------------------------
Emrys—a fiery, red-headed Fae—always embraced her life in the Highlands, far from the city’s draining technology, until she’s sent to London to rejoin the Faery Guard. But this isn’t any normal assignment—she’s sent to guard Prince Richard: Britain’s notorious, partying bad boy and soon-to-be King. The prince’s careless ways and royal blood make him the irresistible for the dark spirits that feed on mortals. Sweet, disheveled, and alive with adventure—Richard is one charge who will put Emrys’s magic and heart to the test.

When an ancient force begins preying on the monarchy, Emrys must hunt through the London’s magical underworld, facing down Banshees, Black Dogs and Green Women to find the one who threatens Richard’s life. In this chaos of dark magic, palace murders and paparazzi, Emrys finds herself facing an impossible choice. For despite all her powers, Emrys has discovered a force that burns brighter than magic: love. 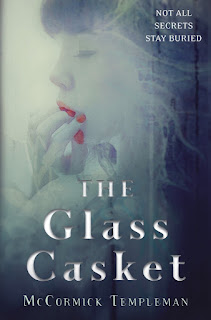 THE GLASS CASKET
by McCormick Templeton
Publisher: Delacorte Press
Amazon, B&N, Goodreads
----------------------------
Death hasn't visited Rowan Rose since it took her mother when Rowan was only a little girl. But that changes one bleak morning, when five horses and their riders thunder into her village and through the forest, disappearing into the hills. Days later, the riders' bodies are found, and though no one can say for certain what happened in their final hours, their remains prove that whatever it was must have been brutal.

Rowan's village was once a tranquil place, but now things have changed. Something has followed the path those riders made and has come down from the hills, through the forest, and into the village. Beast or man, it has brought death to Rowan's door once again.

Only this time, its appetite is insatiable. 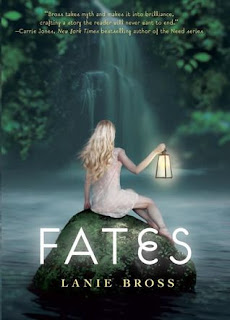 She fell from her tranquil life in Pyralis Terra and found herself exiled to the human world. Her punishment? To make sure peoples' fates unfold according to plan. Now, years later, Corinthe has one last assignment: kill Lucas Kaller. His death will be her ticket home.

But for the first time, Corinthe feels a tingle of doubt. It begins as a lump in her throat, then grows toward her heart, and suddenly she feels like she is falling all over again - this time for a boy she knows she can never have. Because it is written: one of them must live, and one of them must die. In a universe where every moment, every second, every thing has already been decided, where does love fit in? 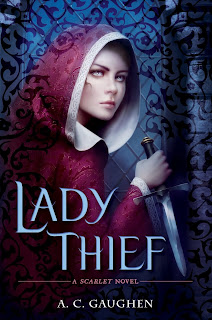 LADY THIEF
Scarlet, Book Two
by A.C. Gaughen
Publisher: Walker Children's
Amazon, B&N, Goodreads
----------------
Scarlet’s true identity has been revealed, but her future is uncertain. Her forced marriage to Lord Gisbourne threatens Robin and Scarlet’s love, and as the royal court descends upon Nottingham for the appointment of a new Sheriff, the people of Nottingham hope that Prince John will appoint their beloved Robin Hood. But Prince John has different plans for Nottingham that revolve around a fateful secret from Scarlet’s past even she isn’t yet aware of. Forced to participate at court alongside her ruthless husband, Scarlet must bide her time and act the part of a noblewoman—a worthy sacrifice if it means helping Robin’s cause and a chance at a future with the man she loves. With a fresh line of intrigue and as much passion as ever, the next chapter in Scarlet’s tale will have readers talking once again. 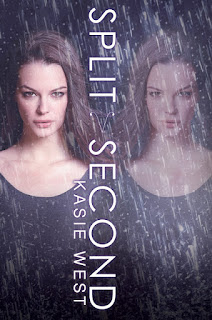 Addie hardly recognizes her life since her parents divorced. Her boyfriend used her. Her best friend betrayed her. She can’t believe this is the future she chose. On top of that, her ability is acting up. She’s always been able to Search the future when presented with a choice. Now she can manipulate and slow down time, too . . . but not without a price.

When Addie’s dad invites her to spend her winter break with him, she jumps at the chance to escape into the Norm world of Dallas, Texas. There she meets the handsome and achingly familiar Trevor. He’s a virtual stranger to her, so why does her heart do a funny flip every time she sees him? But after witnessing secrets that were supposed to stay hidden, Trevor quickly seems more suspicious of Addie than interested in her. And she has an inexplicable desire to change that.

Meanwhile, her best friend, Laila, has a secret of her own: she can restore Addie’s memories . . . once she learns how. But there are powerful people who don’t want to see this happen. Desperate, Laila tries to manipulate Connor, a brooding bad boy from school—but he seems to be the only boy in the Compound immune to her charms. And the only one who can help her.

As Addie and Laila frantically attempt to retrieve the lost memories, Addie must piece together a world she thought she knew before she loses the love she nearly forgot . . . and a future that could change everything. Ember Miller and Chase Jennings are ready to stop running. After weeks spent in hiding as two of the Bureau of Reformation’s most wanted criminals, they have finally arrived at the safe house, where they hope to live a safe and quiet existence.

And all that’s left is smoking ruins.

Devastated by the demolition of their last hope, Ember and Chase follow the only thing left to them — tracks leading away from the wreckage. The only sign that there may have been survivors.

With their high profile, they know they can’t stay out in the open for long. They take shelter in the wilderness and amidst the ruins of abandoned cities as they follow the tracks down the coast, eventually finding refugees from the destroyed safe house. Among them is someone from Chase’s past — someone he never thought he’d see again.

Banding together, they search for a place to hide, aiming for a settlement a few of them have heard about... a settlement that is rumored to house the nebulous organization known as Three. The very group that has provided Ember with a tiny ray of hope ever since she was first forced on the run.

Three is responsible for the huge network of underground safe houses and resistance groups across the country. And they may offer Ember her only chance at telling the world her story. 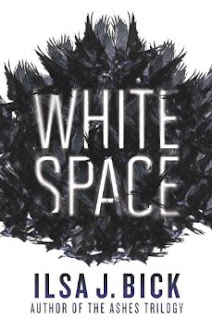 WHITE SPACE
Dark Passages, Book One
by Ilsa J. Bick
Publisher: Edgmont USA
Amazon, B&N, Goodreads
-----
In the tradition of Memento and Inception comes a thrilling and scary young adult novel about blurred reality where characters in a story find that a deadly and horrifying world exists in the space between the written lines.

Seventeen-year-old Emma Lindsay has problems: a head full of metal, no parents, a crazy artist for a guardian whom a stroke has turned into a vegetable, and all those times when she blinks away, dropping into other lives so ghostly and surreal it's as if the story of her life bleeds into theirs. But one thing Emma has never doubted is that she's real.

Then she writes "White Space," a story about these kids stranded in a spooky house during a blizzard.

Unfortunately, "White Space" turns out to be a dead ringer for part of an unfinished novel by a long-dead writer. The manuscript, which she's never seen, is a loopy Matrix meets Inkheart story in which characters fall out of different books and jump off the page. Thing is, when Emma blinks, she might be doing the same and, before long, she's dropped into the very story she thought she'd written. Trapped in a weird, snow-choked valley, Emma meets other kids with dark secrets and strange abilities: Eric, Casey, Bode, Rima, and a very special little girl, Lizzie. What they discover is that they--and Emma--may be nothing more than characters written into being from an alternative universe for a very specific purpose.

Now what they must uncover is why they've been brought to this place--a world between the lines where parallel realities are created and destroyed and nightmares are written--before someone pens their end.