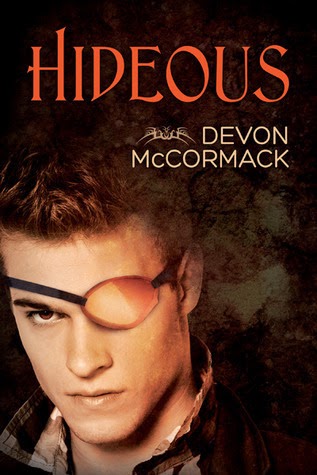 Eight years ago, Luke Retter witnessed the brutal murder of his mother and sister at the hands of his demon-possessed father. He survived but lost a hand and an eye. The demon also burned its emblem into his skin, marking him as a cursed. Those who bear this mark are at risk of becoming possessed themselves, so they are monitored and enslaved by the state-run UCIS. Working as a slave is hard, but Luke prefers it to the possibility of being controlled by a demon.

One night, Luke wakes to find his worst nightmare coming true. His father’s demon has returned. In a panic, he runs to the only person who might be able to help: Zack, a cursed who ran away from the state and created an underground community to protect other fugitive curseds. Zack helps him suppress the demon. But the city’s become a time bomb, and Luke’s demon itches to escape.

With the UCIS closing in on Zack’s underground operation and Luke’s demon crafting its own, nefarious plot, Luke realizes that he must take a stand.

AUTHOR BIO
Devon McCormack spends most of his time hiding in his lair, adventuring in paranormal worlds with his island of misfit characters. A good ole Southern boy, McCormack grew up in the Georgian suburbs with his two younger brothers and an older sister. At a very young age, he spun tales the old fashioned way, lying to anyone and everyone he encountered. He claimed he was an orphan. He claimed to be a king from another planet. He claimed to have supernatural powers. He has since harnessed this penchant for tall tales by crafting whole worlds where he can live out whatever fantasy he chooses.

A gay man himself, McCormack focuses on gay male characters, adding to the immense body of literature that chooses to represent and advocate gay men's presence in media. His body of work ranges from erotica to young adult, so readers should check the synopses of his books before purchasing so that they know what they're getting into.