Today we're joining the Victim Souls blog tour by chatting with author Andrew Terech. Grab a cuppa and sit back while we get to know Andrew and his book.

Andrew’s a horror fiction writer who is also a massive fan of the genre. He’s been writing short stories and working on his novel for over 5 years. He has several short stories published, as well as some editing credits. He moderates a writing workshop in Phoenix, AZ where he’s been exposed to many different forms of fiction, which have broadened his influences. He aims to write stories that creep out his readers, while offering well-developed, rich characters they can sink their teeth into. He’s also a fan of experimenting with form and structure to create something uniquely my own.Andrew grew up on Long Island in New York, and has lived in Arizona for the past 7 years. His professional background is in psychology where he’s carved out a nice career for himself. However, writing has always been his passion.Currently, he’s hard at work, developing additional content to publish. He hopes to find an audience that loves the genre, and is up for a good scare.

Hi, Andrew, and welcome to We Do Write. Tell our readers a bit about VICTIM SOULS. 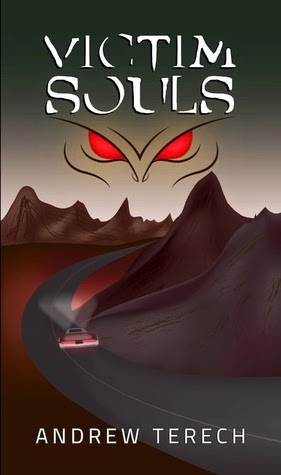 VICTIM SOULS is a novel I wrote based on a concept. I wanted to write something that pitted the “bad guys” against evil. Additionally, the intent was for the style to impose an unrelenting tension and discomfort on the reader. From there, I drafted up distinct characters, threw them into a dynamic environment and let the story tell itself. As a whole, VICTIM SOULS is a wild ride of action and horror that is intended to leave the readers on the edges of their seats.

Cool! How did the idea of the story come to you?

The idea developed organically. I did a lot of research on Aleister Crowley and Demonology to help set up the framework and rules of the supernatural world I created. Most of the plot was planned out as I wrote. The focus of the writing process was more on the concept than the plot. That being said, the plot came together smoothly despite the lack of planning.

Definitely a panster. Most of my writing comes from a conceptual model with well thought-out characters. I like to create an environment, mood and tone then stick the characters in the scene and let the writing decide what’s going to happen. There are times where future plot points come to me as I’m writing, so I’ll jot them down for future reference. I probably use about a third of those ideas and scrap rest. I’ve tried to outline thing, and my writing came off as stilted and forced. I’m just not that kind of writer.

Getting the pictures in my brain on the page. Describing scenery and setting in a satisfying way often drives me nuts. I pine over choosing the perfect words. I struggle with efficiency. I don’t want to bore the reader with a 300-word description of a room, but I also don’t want to cheat them out of an effectively written atmosphere. I much prefer writing dialogue and action.

Depends on the time of day. Morning and early afternoon: a cup of coffee. Evening and night: a beer. I also like to keep a few writing resources at my side such as research material or my Thinker’s Thesaurus.

I’m going to cheat on this one a little. I’d choose immortality, but with a three rules that foil the whole monkey’s paw, be careful what you wish for traps. Rule 1: I’m still human. Rule 2: No aging past 30. Rule 3: I can choose to end my own life at any point. Not like I’ve put a lot of thought into this before or anything.

I was listening to a podcast and the were talking about something called a “blue waffle”. That’s about all I need to say about that. I would suggest that if you’re reading this, don’t fall into the same curiosity trap that I did.

Working my ass off!

First, I’ll thank my lovely wife, Laura. Without your encouragement and support my writing career would still be just a dream. I’d like to thank the Central Phoenix Writing Workshop for helping me grow as writer. Specifically, David Nicol, Chris Wilke and Cam Milkins. Thank you to Brianna Strawn for the amazing cover. Thank you to Sean Ellis for your guidance and advice as I set forth on this journey. Lastly, thank you to We Do Write for this interview and for the great promotion.

You're very welcome. Thanks for stopping by the blog!