Happy Monday, folks! Today we are happy to feature an excerpt of Bittersweet by Kimberly Loth, a YA Contemporary Romance that features one of my favorite things, roller coasters! 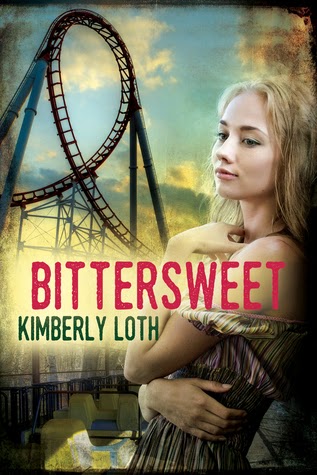 
Every Sunday Savannah Ray gets an email from her dead dad. She doesn’t know how the emails work and she doesn’t mind either as she’s not ready to let go.

Now that her mom is fed up of her rebellious behavior, she has to go to the one place she swore she’d never set foot in after he died—Haunted Valley, the amusement park. Once there and bullied by co-workers & customers, she is distracted by the charming Dallas and falls hard for him.

But Savannah and Dallas both hold secrets that threaten their new relationship. Will Haunted Valley help her move on, or will it destroy her from the inside out?

On Monday, Becca sent me to the Headless Horseman. The ride sucked. Especially during the last two weeks of May. School days. The ride stayed mostly empty except for teenage boys who thought it was the one ride in the park where they didn’t have to follow the rules. They laughed when I stopped the ride and kicked them off.

I approached one guy who’d been goofing off. He had a Twins cap on backwards and would probably be cute if he wasn’t my current source of annoyance.

“You can’t stand on the saddle. I thought I made that clear when I said no standing during the ride.” He grinned at his friends, climbed off the horse, and stood about six inches from me.

“Yeah, what are you going to do about it? Kick me out?”

“Not from the park, but you’ll have to leave the ride.”

He looked at me for a second and shook his head. Then he spat on my shoe. Bright cotton candy blue spit on my almost-new white shoes. So gross.

I knew the right thing to do. I should walk away, call security, and let them deal with him. I knew that. But for some reason I couldn’t help myself.

I spat right back at him. But I got his face instead of his feet. Unfortunately, Becca chose that moment to walk up to the ride. She witnessed the whole thing.

The boy wiped the spit out of his eye and snarled at me.

“You spit on my shoe, I simply returned the favor.”

I dropped the key to the ride into Becca’s hand.

“I need to go to the bathroom. Good timing.”

I turned on my heel and stalked off to the bathroom. I sat in the stall for a minute and tried to process what I’d just done. I ran my hand over my head. There was stubble now. A few more weeks and I’d be able to style it.

I knew I was in trouble. Anger wasn’t an issue. The move was instinctual. He spit on me and I spit back. But I should’ve controlled myself.

I took a couple of deep breaths and went back.

A slew of people stood near the Headless Horseman. Becca, the area manager, and Karl. The queue line was empty.

I played the stupid card.

“Thanks for watching the ride for me. Drank too much water.” I held out my hand for the key and all three of them stared at me like I’d grown horns. Which I suppose I could have, since when I looked past them into the mirror on the ride my head was missing.

Karl was the first one to speak.

“Did you really spit on a guest?” He spoke slowly like I wouldn’t quite understand if he didn’t fully annunciate his words.

“Yeah, got him right in the eye. He deserved it.” I bobbed up and down a bit to see if my head would appear. Nope. The technology was incredible.

“Spitting is neither courteous nor good customer service. We’ve pulled someone from the Demon Drop to take your place for the rest of the day. You need to think about what you’ve done. This stunt earned you four points. Don’t let it happen again.”

I focused on him. “How many points until I'm fired?”

He narrowed his eyes at me. I hated the fact that I couldn’t feel a darn thing. I knew I should feel shame. That’s what any normal person would feel, but since I had no feelings I knew I came across as flippant. I didn’t want to be fired. Not really.

I nodded to show that I understood.

Kimberly Loth can't decide where she wants to settle down. She's lived in Michigan, Illinois, Missouri, Utah, California, Oregon, and South Carolina. She finally decided to make the leap and leave the U.S. behind for a few years. Currently, she lives in Cairo, Egypt with her husband and two kids.
She is a high school math teacher by day (please don't hold that against her) and YA author by night. She loves romantic movies, chocolate, roses, and crazy adventures. Kissed is her first novel.