Today we're joining the NOBODY'S GODDESS blog tour by chatting with author Amy McNulty. Come get to know more about Amy and her book.

Hi Amy! Welcome to We Do Write. Tell us a bit about yourself. 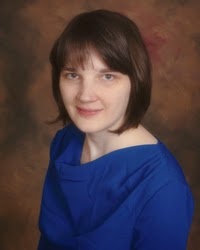 Hello! Thanks for having me on the blog! I am a freelance writer and editor from Wisconsin with an honors degree in English. I was first published in a national scholarly journal (The Concord Review) while in high school and currently spend my days alternatively writing on business and marketing topics and primarily crafting stories with dastardly villains and antiheroes set in fantastical medieval settings.

Website | Twitter | Facebook | Goodreads
Tell our readers a bit about NOBODY’S GODDESS.
Nobody’s Goddess is a story about the freedom to love, how genders relate to each other and going against the status quo. 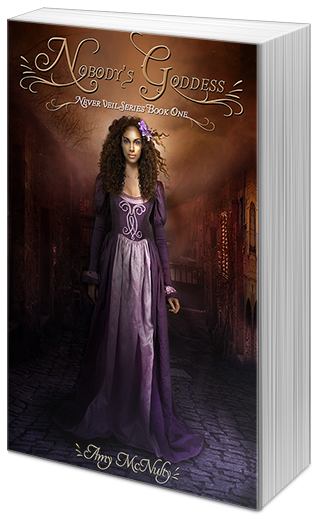 In a village of masked men, magic compels each man to love only one woman and to follow the commands of his “goddess” without question. A woman may reject the only man who will love her if she pleases, but she will be alone forever. And a man must stay masked until his goddess returns his love—and if she can’t or won’t, he remains masked forever.Seventeen-year-old Noll isn't in the mood to celebrate. Her childhood friends have paired off and her closest companion, Jurij, found his goddess in Noll’s own sister. Desperate to find a way to break this ancient spell, Noll instead discovers why no man has ever chosen her. Thus begins a dangerous game between the choice of woman versus the magic of man. And the stakes are no less than freedom and happiness, life and death—and neither is willing to lose.

Chapters Indigo | Amazon | Barnes & Noble | Kobo | TBD
How did the idea of the story come to you?
I’d been working on a shelved, way-too-long manuscript for nine years that had a veiled lord in it. I never came up with the right hook for it. Then I read The Hunger Games and it turned out to be one of those stay-up-all-night life-changing series for me. I don’t think the series influences Nobody’s Goddess too much, but I was in a “book hangover” buzz when I kept thinking about how I wished I could finish a manuscript already. I wanted to salvage my veiled lord from what I had, as he was my favorite part, and the idea of making all of the men, not just him, have to cover up their faces popped into my head. (Although it’s a fantasy book, that aspect is more dystopian, so if anything, that’s where the HG influence shines through.) I’d heard of a number of YA books where women are forced to marry men/bear children in dystopian societies, but not many (any?) where it’s the men forced to marry women, so I thought that would be an intriguing twist.
Are you a plotter or a pantser?
I used to be a pantser, and Nobody’s Goddess was written without an online. After writing another manuscript that screeched to a halt toward the very end because I hadn’t brought all the threads together, I vowed never to do that again! Now I usually write a chapter or two when an idea comes to me and stop to outline the rest of the story. I almost always go off-outline, but I feel better having that structural skeleton in place in case I’m low on ideas.
What’s the hardest part of writing for you?
Writing the first draft. It’s a bit overwhelming to have tens of thousands of words ahead of you, and sometimes I have to work hard to keep up the momentum and write every day until I’m finished or I might lose enthusiasm for it.
What do you absolutely have to have nearby when writing?
Lip balm, so I don’t have to get up and stop writing when I need it. I like having my cat nearby, too, but she isn’t always in the mood to hang out with me.
What are you reading right now?
I put novel-reading on hold to marathon Fables from Vertigo comics. I loved The Wolf Among Us, a game by Telltale, and I found out it was based on this comic series.
If you could have any super power, what would it be?
Telekinesis. I’ve thought since I was a kid that it would be so awesome to move things with my mind, but only because I’m lazy and don’t want to get up if I don’t have to. If I had that power, I’d probably get really unhealthy stuck on the couch.
What's the weirdest thing you've googled?
“Do a lot of people cut their nails really short?” I’m compulsive about it…
Finish this sentence: If I'm not writing, I'm probably ...
…watching anime.
Here’s the part where you thank the people who are supporting you. Let's hear your shout outs.
Thanks, Melissa, Cameron, Mom and Sara! Also thank you to Georgia, Bethany, Jason, Lindsay, Jaime and everyone else who’s helped get Nobody’s Goddess into readers’ hands!