Hello folks! I hope you all had a lovely holiday. Today, we are happy to host Georgia McBride, author of Praefatio, a YA paranormal novel. Georgia has stopped by to answer a few questions about her book, herself, and her writing process. But first, a bit about the book .... 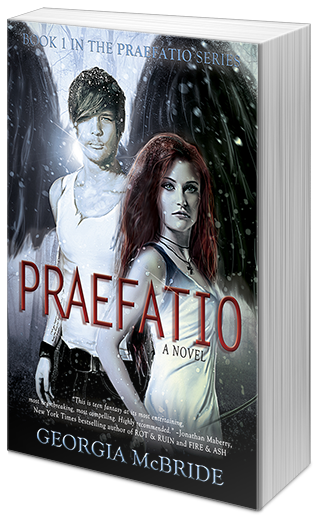 After having been missing for weeks, Grace is found on the estate of international rock star Gavin Vault, half-dressed and yelling for help. Over the course of twenty-four hours Grace holds an entire police force captive with incredulous tales of angels, demons, and war; intent on saving Gavin from lockup and her family from worry over her safety.

Authorities believe that Grace is ill, suffering from Stockholm Syndrome, the victim of assault and a severely fractured mind. Undeterred, Grace reveals the secret existence of dark angels on earth, an ancient prophecy and a wretched curse steeped in Biblical myth. Grace’s claims set into motion an ages-old war, resulting in blood, death and the loss of everything that matters. But are these the delusions of an immensely sick girl, or could Grace’s story actually be true?

Praefatio is Grace’s account of weeks on the run, falling in love and losing everything but her faith. When it’s sister against brother, light versus darkness, corrupt police officers, eager doctors and accusing journalists, against one girl with nothing but her word as proof: who do you believe?

Hi Georgia! Welcome to We Do Write. Tell us a bit about yourself.

Thanks for having me.  I am NYC born and raised. I now live in the South and have not yet acclimated in the seven years I have been here. I used to work in the music business and tech sector. You might know some of the artists I worked with – Destiny’s Child, Fall Out Boy, N’Sync, JaRule, Aaron Carter.  You might also have heard of some of the websites I had a hand in- MTV.com, eBay, Toysrus.com. I am a total dog person. Have 3 dogs, a fish and a parrot. If I had to describe myself, I would say “total Geek, recovering nerd, forever romantic.” Oh – I also write books and publish stuff.

Tell our readers a bit about PRAEFATIO.

PRAEFATIO is about a girl who everyone thinks is a runaway. They’ve found her and now the person on whose estate she was found on, rock star Gavin Vault, is under arrest for her kidnapping. But, as the story unfolds, there is much more at play here, even as the doctors believe she is suffering from Stockholm Syndrome. They refuse to believe Grace’s story, which is that she is in fact an angel AND what happened to her is not an isolated incident, but the beginning of an ages-old prophecy in which she plays a huge part.

Characters began filling my head with their voices. I actually believed I was going crazy. Gavin Vault began speaking first, then Grace’s mother, then her brother Remi. Finally I started to write it all down. After I realized I had a story, I asked Grace to tell hers. A week later, she began to tell me what happened to her. I’m not insane, I promise.

I’m definitely a panster. I try to let the story grow organically. Every time I have ever plotted and try to steer the story, it has gone completely off course.

Hmm. I would say believing that anyone would want to read or, God forbid, like my stories.

Coffee, wine, water. Not in that order. One of my dogs underfoot.

I am about to read RED QUEEN and AN EMBER IN THE ASHES. So excited to read them both.

I want to fly.

Being an editor, I have to research lots of things. I have googled all kinds of things that are actual criminal in nature. The thing that made me the most nervous was researching how to counterfeit money!

Reading or listening to music, watching TV or at the movies.

OMG. First, thank you. It feels good to talk about a book I completed in 2011 and that was published in 2013. You guys rock. I have a long list of thank yous in the book, so I will just thank the readers, who to this day, ask when is book 2 coming. 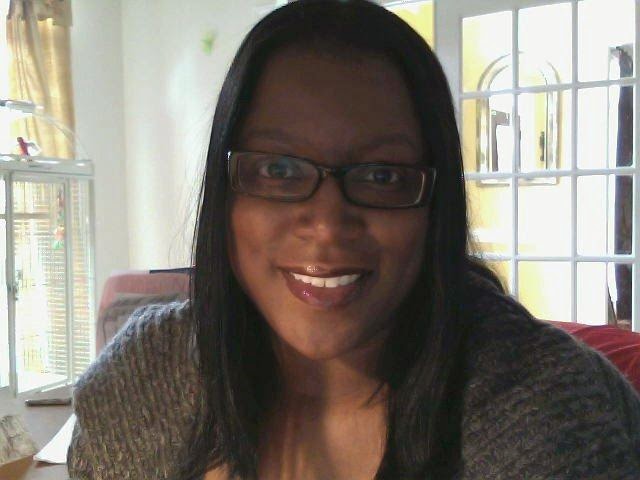 Georgia loves a good story. Whether it’s writing her own, or publishing someone else’s, story is at the heart of everything Georgia does. Founder of Month9Books, YALITCHAT.ORG and the weekly #yalitchat on Twitter, Georgia spends most of her days writing, editing, or talking about books. That is, of course, when she is not blasting really loud music or reading. She lives in North Carolina with four dogs, a frog, a parrot, 2 kids, parents and a husband. PRAEFATIO is her first novel.

Posted by Elizabeth Holloway at 7:59 am
Email ThisBlogThis!Share to TwitterShare to FacebookShare to Pinterest
Labels: blog tour, Georgia McBride, giveaway, Praefatio, rafflecopter, YA Paranormal, YA Paranormal Fantasy, YA Paranormal Romance