That weekend went by fast, didn't it? No worries! We'll pretend it's still the weekend by sitting back and indulging in an interview with author Steven Montano who is here to talk about his book, BLOOD SKIES.

Welcome to We Do Write, Steven. Tell us a bit about yourself.


My name is Steven Montano, reputedly of Denver, Colorado, though that has yet to be confirmed.  These days I live in Washington State.  I’m an accountant for Wizards of the Coast, and I write dystopian military fantasy novels in what passes for my spare time.


Since I was in high school.  My first stories were pretty terrible, but I actually decided to Major in Creative Writing in college, and while that didn’t exactly do squat for me career-wise it was still a wonderful experience.

Tell us about Crown of Ash and The Blood Skies series. What’s the story about? 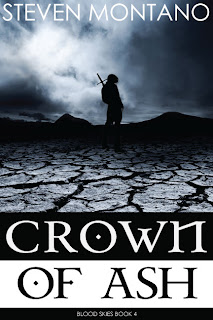 The Blood Skies series is a dark fantasy saga about a magical cataclysm that’s reshaped the Earth and turned it into a wasteland.  Humans are embattled by dark forces and monstrous creatures, the worst of which are the vampires of the Ebon Cities.  Luckily for us, humans now possess magic, and they’ve banded together in a loosely organized confederation of city-states called the Southern Claw Alliance.  For over twenty years they have waged war with the vampires.

Crown of Ash is the fourth book in the series, picking up where Book 3 (Soulrazor) left off as warlock Eric Cross and his band of mercenaries try their best to get home after a particularly harrowing mission. 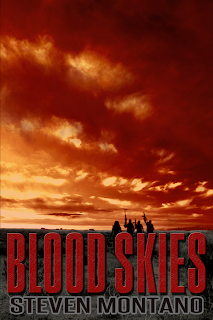 The Blood Skies series actually stemmed from a dream I had about women in a forest being hunted down by black unicorns. That sounds kind of silly, but the dream had a profound emotional impact on me, and the imagery and feelings from that dream grew into the core of the back story for where magic came from in the Blood Skies world.


Now I'm wondering if there are black unicorns in your books. ;) Do you have a critique group/partner or beta readers, or do you self-edit?


I mostly self-edit, though I do have a couple of proofreading/beta reading homies (most notably my wife Liberty and Indie author Jen Kirchner) who give me feedback.  I probably should use a professional editor, but editing has become such a part of my process now that I’m not sure if I could give it up.  I edit each book from start to finish an average of 6 times.


Again…both. ;D  I tend to have VERY loose outlines, which usually break down a book chapter-by-chapter…only the description for each chapter is really only a sentence or two.  I keep major plot points in mind, but I make up the rest as I go along.  The biggest joy of writing for me comes from the undiscovered twists and developments in the story, and I think if I planned things out too carefully I’d be robbing myself (and my readers) of some of that joy.


Finding time to do it.  I tend to write very efficiently, but with the amount of time I spend at work, commuting, marketing, and just being with my family, actually scoring time for writing and editing can be a real challenge sometimes.  But, still, I make it work.  I have to.  ;D

I hear ya! What do you absolutely have to have nearby when writing?


Books that inspire me, music, and tons of caffeine.  Having my wife nearby helps, too, because I can spout off random ideas to her and she’ll usually help me make sense of them. Plus she’s purty. =D


I’m going to go with telekinesis.  It’s versatile: telekinetic blasts, flight, make myself move like Neo in “The Matrix”…stuff like that.

But I’d also want a weapon.  Maybe a nice Hawkeye bow and some razor-tipped and explosive arrows. ;D


Vampire Military Fashion Trends.  Not as much there as you might think.

Quick writing test! Use the following words in a sentence: bloody, barricade, and preposterous.


The bodies were fused into a bloody barricade that stretched up to a preposterous height.
(Note: I swear I’ve written that sentence before…)

Awesome! Finish this sentence: If I'm not writing, I'm probably ...


…thinking about writing.  Or drinking wine.


Good grief, there isn’t enough space on the internet to thank all of the people who’ve helped me out and supported me.  Liberty, Jen, Alan, Candice, Mike, John, D.H., Rob, Zoe, S.J., Shannon, the Guild of Dreams, Indie Writers Unite!, the people on Goodreads, all of my Twitter followers…etc.  I’m grateful to have met so many awesome authors, reviewers, and readers out there.  Each and every one of you rocks.

Interesting what a dream can inspire. Enjoyed the interview and good luck, Steven, with all of it!

Great interview! Looking forward to delving into these books.