Guest Post: Christina G Gaudet - The Lure of Magic in MG and YA Books


When I was asked to write a post about the lure of magic in middle grade and young adult novels, I thought “Great! Easy! I’ve been drawn to books with magic in them my whole life, so I can just talk about personal experience.” But as I started to write, I realised I had no idea what drew me to those stories.

There are two types of books with magic in them that are particularly popular right now. First, there are the stories of adventure with a clear bad guy to hate and a good guy to love. The main character develops their skills with magic, or makes friends with someone with magic in order to save the day. This type of story is what I consider the more traditional style of fantasy. In MG and YA, the genre is still led by J.K. Rowling’s Harry Potter.


What’s really attractive about this type of story is that readers know exactly who to cheer for. They can place themselves in the position of the hero and can live vicariously through them throughout the adventures of the story. Through the hero, readers can use the magic all of us have wanted to posses at some point in our lives. Magic helps to intensify everything that occurs in the story, from the good to the bad, making the story more exciting than possible in “real life.”

Second, readers are looking for magical characters to fall in love with. These types of stories are less about an outward struggle against an evil being, but instead about an impossible romance where the magic keeps the two swoon-worthy lovers apart. This type of story is known as paranormal romance and Twilight, by Stephanie Meyer dominated this genre for a long time.

In these types of stories, there’s a sense that the events are happening in the real world. If we as readers could only get to the right place at the right time, we too could experience the supernatural events. The magic is created to seem so realistic that part of us hopes the hot supernatural guy/girl in the story will leap from the page and sweep us off our feet.

There are many other types of stories out there that include magic, but those two seem to be the most attractive to both readers and writers right now. Magic in stories has been around for a lot longer than these two examples and can be traced back to stories by Tamora Pierce and Lloyd Alexander who I personally read while growing up, all the way to Greek and Roman mythology. Magic has always been an exciting way to explain the unexplainable.

It’s hard to put my finger on what exactly draws me to magic. Perhaps it has something to do with the way it can punch up the excitement of a story, create impossible and wonderful characters, and explain the unexplainable. But, I think what really draws me to magic is that it allows me to believe there’s more to the world then I can ever know, and only my imagination is the limit to what’s possible.

While its popularity might rise and fall over time, magic will be featured in stories as long as novels exist.

Christina G Gaudet is a young adult author. When not writing, Christina can be found working on comics, illustrations and designs. She grew up and continues to live in Prince Edward Island, Canada where having red hair instantly makes you famous.

Blurb from THE BOX by Christina G Gaudet

Some gifts should be left unopened. 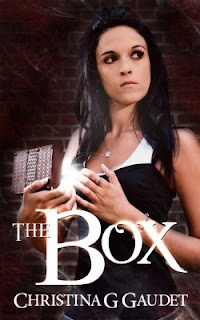 When her gran passes away, the only item left to Lou is a small wooden box. Although it’s not the car that her sister, Cindy, receives, Lou knows it could have been worse. She could have gotten Gran’s collection of toenails. When Lou opens the box and a guy the size of a stick of gum falls out; she changes her mind – the nail clippings would have been better.

Not a day goes by that Lou doesn’t wish she could shove that guy back in the box and pretend she’d never laid eyes on him. Because of him, she discovered Gran was a sorceress and Cindy is a witch and all these years they have been keeping Lou’s magic locked away “for her own safety.” Without the magic she’s vulnerable to whoever, or whatever, is after her. With it, she’s a target for a fate worth than death.

I think I make a squeaking sound, though it might be a full out scream. Either way, the thing hears me and turns its heads—because one head isn’t bad enough—and looks directly at me. All of those lessons kick in and I react without thinking, pirouetting on my right foot and bolting as fast as I can into the darkness of the trees.

“What?” Al’s voice is tight with fright. “What is it? What’s happening?”

It’s gaining on me. I can practically feel the heat of its breath. A glance over my shoulder and I see it’s not breath I feel. The bloody thing is shooting fire. From one of its mouths. I am so dead.

As I’m turning to face forward again so I can pick up speed, I realize at the last second the creature’s muscles are tensing as it prepares to leap. I stop and spin around to the side, my arms guiding the huge beast past me as I’ve done a hundred times for normal human attacks in practice. Most people don’t have teeth and claws to rip at your skin as they pass. With the creature facing the wrong way, I run back in the direction of the car. The size of the thing, I should have a decent head start before it can turn all the way around. Plus, I should be helping Cindy. I guess.

I’m wrong. It’s fast. Faster than anything its size should be able to move. This time when I turn to meet the attack, I do a spinning kick my master would be proud of. My foot lands hard on one of the heads, knocking it back for a second. The problem is the kick only seems to surprise the creature rather than hurt it. When I kick again, it easily dodges out of the way and sweeps its snake tail around to whip the back of my legs.

I fall to the ground and attempt to scramble away, but it’s no good. Holding the lipstick container hard against my chest, I wait for the inevitable pain and death.