Welcome, Terence! Tell us a bit about yourself. 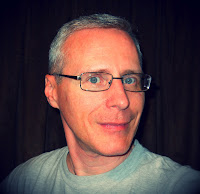 I am originally from a very rural area of North Carolina - spent most of my life there until 2002 when I moved to Fargo, North Dakota, where I still reside. I work at North Dakota State University as an administrative secretary - the only male secretary on campus. I grew up watching all those great black & white horror movies - Dracula, The Werewolf, etc. - on Saturday mornings and I've always had a love for the macabre. I also watched a lot of British television, especially Dr. Who and the comedies so I've been a huge anglophile for some time, as well.

I began writing when I was in college back in the 1970s, never anything serious, though. It was just for me that I wrote - mainly short stories and such. I started writing seriously in 2007 as a way to beat the boredom of winter in Fargo. My first story was "Thirty Days and Counting." It is a military love story I wrote that was inspired by - of all things - a Reba McEntire song. It took me about a year to write it and I had just completed it when I came across the Amazon Breakthrough Novel competition and I entered it. I did okay for a first-timer but I didn't win. I did publish it through Amazon's self-publishing platform and I got the bug - I wanted to write and publish more! My next book was "Von Dred" a vampire story that was inspired by a couple of notes written to me by my work study student at the time. He wound up creating the cover art for the novel. The sequel to "Von Dred" is titled "The Book of Jacob" and it follows one of the characters from "Von Dred" and tells the story from his viewpoint. That brings us up to date and to my proposed trilogy of vampire novels.

Tell us about the first book in your BLOOD UNDERGROUND series. What’s the story about? 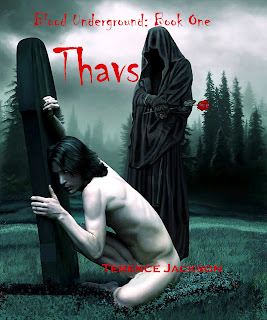 The first book in the "Blood Underground" trilogy is "Thavs." Thavs is a term that I came up with that is based on the English term, chavs. The novel tells the story of two men, Henry Stuart and Liam Thackeray, two of the vampires that inhabit the unused tunnels beneath the city of London. In my typical fashion, it gives a good deal of background on the characters so the reader can appreciate why they are the way they are as vampires. What is atypical for me was the style of writing. First, all my stories up until this one have been first person. Secondly, instead of a linear storytelling as in my other novels, this one bounces back and forth between the past - around 1820 - and present day all set up by a series of flashbacks by the main characters until the storyline intersects with itself. The story deals with a lot of vampire lore, both old and new, as well as dealing with human emotions, humanity, and what it's like when one lets the monster win.

I was in London last October by myself, just after the rioting. I have lots of friends in England but one day I was at odds for anything to do. My best mate works for the Underground as a station manager so in deference to his job I decided to take the tour of the unused portions of the  underground. I found it fascinating the number of unused stations and platforms and tunnels and the condition in which they were left. I always have a notebook with me so if inspiration hits I'm prepared. It did. I took notes on everything the tour guide said and the idea grew and grew that it would make a great setting for a vampire novel.

I do have several people who read my manuscripts before I consider publishing them. Most of them are professors in various fields at the university - art history, philosophy, etc. They give me a good deal of input on the storyline, the background, and insight into the characters. I will then take their suggestions and corrections and do the second writing. After that I usually have one or two friends in England that I will send it to for their input, to see if there are any problems with any of my phrasings, Briticisms, or details. Once I get it back from them I will do the third writing, and after that I usually let the manuscript sit for a couple of weeks and work on other stories. When I come back to the nearly completed novel I read and edit it as I go, taking it very slowly as I go. In "Blood Underground: Book One - Thavs" it added nearly 30 pages to the story when I was done with it all. Then just to satisfy my own anal retentive needs, I order a proof copy and read it through once more before releasing it.

You know, it took me a couple of minutes to figure out what you meant by "pantser." I'm still guessing that it means by the seat of one's pants. My English friends would probably get a big kick out of "pantser" as it would mean something totally different over there - sort of like how "fanny" means something totally different to an Englishman than to an American. Since I've already spilt the beans that I'm anal retentive - and probably a bit OCD as well - I guess I'd say I am a planner. I make an outline of proposed chapters for a story making changes to it as I go along, but, ususally, the final product sticks pretty much to the outline with which I start. The only time I don't plan out every minute of the day is when I'm in London by myself; it just enjoy it as it comes.

The hardest thing about writing for me is knowing when to stop, or better yet, when to release the story. I'm a perfectionist and it is very difficult to click the mouse on the "publish" key. All the rest of it is easy when compared to actually publishing my work.

I do have things that I have to have around me or in front of me when I'm writing, but it's never the same thing. It's always something different for each novel I write. For instance, for "Thirty Days and Counting" my father had just passed away and I had some of his military medals I had recovered. For "Von Dred" and "Jacob" it was the notes written by my work study student. For the "Blood Underground" series I've been using the photographs I took while on the "forgotten underground" tour. I even made one of them my desktop background on my computer.

Hmm. It's hard to choose. I guess if pushed, I'd have to say invisibility. I'm an observer of everything - people, places, and things - and I just think it would be advantageous to be able to observe without being a part of the equation.

You know, I really don't have an answer for this question. I guess it would have to be vampires and the folklore behind them, but nowadays, that's not all that weird.

Quick writing test! Use the following words in a sentence: understand, underground, and underwear.

I understand that you have to wear underwear on the underground.

thinking about some piece of dialogue or scene-setting for a story.

Wow, I'm not sure you have enough space but I'll try!

I guess first would have to go to Hazel Larsen, fellow author for turning me onto your blog. I've had the pleasure of beta-reading her last novel and we've become good friends.

Next would be to my test subjects at the university - Dennis Cooley, professor of Philosophy and Ethics, and Kris Groberg, associate professor of art history. They have been my main readers on all of my stories and are truly honest about my plots, dialogue....everything.

A big shout out to Kris Kobus, my best mate and all round good guy in London. He has been the inspiration for several characters in my books and is probably one of my biggest fans.

Another one of my friends in the U.K, Gerard Stewart, has also inspired several characters, he himself being such a character in his own right.

I have to thank my mom and dad, although both gone and they never got to read any of my books, they were truly inspirational in the way I was brought up and the values they instilled in me.

Another shout out goes to Michael Baumgartner who was the guy who inspired my vampire novels - "Von Dred" and "The Book of Jacob" - and upon whom the character of Jacob was based; also for the great cover art for Von Dred.

A big thanks goes to my mate Adrian - one name, like Cher - in London; he provided the cover art for "Blood Underground: Book One - Thavs." I told him I wanted provocative and he certainly went the distance on that one.

I guess finally would have to be to all those out there who have read and commented on my books. I've been told my writing is everything from "wonderful, inspiring, etc." to "vampire porn" (I get a big chuckle everytime I think about that one) and I take it all in stride. The one thing that does get me is when people read the second book and not the first one in the vampire stories, then complain that there's things missing from the plot - things that are all explained in great detail in the first book. But all-in-all I enjoy the fans and hearing how much they love my writing and that they can't wait for the next book to come out.