Today marks the release of SIDEKICK: THE MISADVENTURES OF THE NEW SCARLET KNIGHT by Pab Sungenis, released by Month9Books. 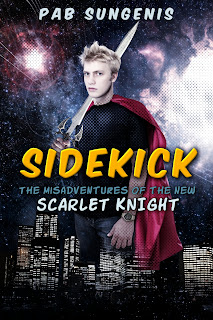 Bobby Baines is in high school, which is bad enough. When his hero, Scarlet Knight, dies, Bobby is forced to take up his mantel. Only Scarlet Knight never had to deal with eeking out a passing grade in math, keeping his fellow sidekicks in check, or stopping a giant squid from bearing down on his school and crushing everyone inside. After all, Bobby Baines is no super hero, he’s a Sidekick!

Congrats on your book release, Pab! Looks like an awesome read!

Goodreads
Amazon
Barnes and Noble
Posted by Dorothy Dreyer at 6:20 am
Email ThisBlogThis!Share to TwitterShare to FacebookShare to Pinterest
Labels: Month9Books, Pab Sungenis, Sidekick: Misadventures of the New Scarlet Knight, YA Superhero