Here's a post for all you sci-fi fans. Get comfy and read all about how Star Wars influenced a writer. We're chatting with author Robynn Sheahan about her current series.

Welcome to We Do Write, Robynn. Tell us a bit about yourself.

Thank you for inviting me here today, Dorothy, this is an honor!

Wow, about myself? Well, I think I’m basically average. I spent most of my growing up years in the country and in the woods, surrounded by horses, dogs, and other ranch type animals. I never owned a Barbie Doll, but I did enjoy playing Barbie’s with a girlfriend who had them all.

Me, I had plastic horses, dogs, and other ranch type animals I kept in brown paper bags and played with all the time.

I had a great imagination.

I went to college. Wanted to be a nurse. Ended up being a Paramedic/Firefighter. That was a great time in my life!

I went on to run my own ranch for about eighteen years. I had horses, dogs, and other ranch type animals.
Hmmm. I’m sensing a pattern here.

Now I write and I love it. And by the way, there are horses (caporas), dogs (maejen), and other various animals ( katjaramuud, asador, kenyon, and bonthar) in my stories.

I’ve always enjoyed writing, playing around with different ideas, but the serious stuff began about seven years ago.

I guess you would call it Fan Fiction. Star Wars Fan Fiction. I wrote an entire book. One hundred and ten thousand words.

I took my fan fiction to a “So You Want to Get Published Class” and the first thing the instructor asked me was, “Why don’t you write your own story?”

My own story?! (Grumps out of the class a tad deflated.)

Tell us about Storm of Arranon. What’s the story about? 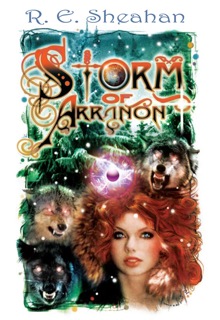 Storm of Arranon is a series about Erynn Yager and Arranon. Arranon is a wild, dangerous, but beautiful world complete with a harsh environment and hostile life forms. Erynn learns she is linked to this unforgiving planet by magic and blood. The magic comes from the living spirit of Arranon herself.

Erynn’s blood tie to Arranon is from a father she never knew, a secret she keeps with her adoptive dad on her home world of Korin. Her very birth as a child of two worlds is forbidden. This mixed heritage has given her abilities she has struggled all her life to control, making her feel like an outcast. Erynn achieves a sense of belonging when she is accepted into Interceptor pilot training and believes her life is finally going in a direction where she will succeed.

This is the part where I start messing with Erynn’s life!

Not always in a bad way, though. Erynn does find love with Jaer, the really hot leader of the Anbas Warriors of Arranon.

Okay. It’s rocky at first, but they do get together, until something else goes wrong and Erynn is again pulled away to learn more about her abilities and fight the evil threatening Arranon.
Erynn never gives up hope for Arranon—or for love.

How did the story idea come to you?

Like I said earlier, I was writing fan fiction (Star Wars) and was crushed when I was advised the story would never go anywhere. (To write Star Wars branch stories, you must be invited to do so by the Star Wars Gods.)

Okay. Get over it.

What if I changed a few names, (to protect the innocent), came up with a new location, added a different spin to the central good vs evil plot, and basically let the characters take over and tell their own story?

When I allowed my characters a voice, my story, Storm of Arranon, took off all on its own. In fact it went from three books to five. Five?

I understand the second book in the series is out. Can you tell us about that? 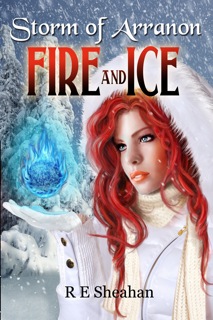 Yes, Storm of Arranon-Fire and Ice.

Erynn’s life once again starts to smooth into a sense of order and routine. That is until disturbing visions invade Erynn’s thoughts. She discovers another realm, different from the harsh surface, but equally beautiful and magical.

Dhoran, the evil ruler of the underworld of Arranon, has come back to claim what he believes to be his. All of Arranon, above and below. He possesses a human host and begins a conquest not only of Arranon, but also of Erynn.

Erynn and Jaer’s love takes a slight detour, well, maybe not so slight. Jaer, it seems has a secret or two of his own.

Erynn is thrust into this underworld, meeting the inhabitants, connecting on a deeper level with the living Arranon, and learning that things aren’t always as they seem.

Do you have a critique group/partner or beta readers, or do you self edit?

I love my critique group! We used to meet at least once a week. Now they have become my beta readers. I would love to return to the weekly critique sessions. I believe I get more work done with a deadline for new material.

I also have and editor. She is so mean, but gets a great story out of me. I love her!
And I have a proofreader who is awesome!

The first page. The first paragraph. That first line. They are so important!

So true! What do you absolutely have to have nearby when writing?

I'll just pretend to know what that is and google it later. ;) What’s the weirdest thing you’ve googled?

Crystals, Rutilated Quartz to be precise.

Quick writing test! Use the following words in a sentence: stormy, misfits, and fluctuate.

Stormy days hide the misfits, the independent rays of sun that fight through the darkest clouds to fluctuate, light then dark across the distant hills.

Finish this sentence: If I’m not writing I’m probably . . .

Awesome! Here’s the part where you thank the people who are supporting you. Let’s hear your shout outs.

Bob and Ruth Harris who encourage me and tell me, nicely, when I’ve messed up.
Martha Straube who helps me dream big.
Russell Turney who keeps me laughing when the going gets tough.
Karen Parker, my editor.
Jackie Jones, my proofreader.
All those awesome readers who have given me reviews on the books. Yeah!

Thank you again, Dorothy for inviting me! This was great fun!