Today we're chatting with author Melissa Jo Peltier about her novel, REALITY BOULEVARD.
Welcome to We Do Write, Melissa. Tell us a bit about yourself. 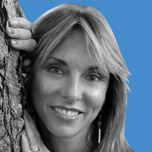 I was born in Boston, Massachusetts in the early 60’s. The first time I saw my Dad cry was the day Bobby Kennedy was shot. I attended the excellent public schools of the Wellesley, Massachusetts school system, where I got an education comparable and sometimes superior to many of my college friends who attended posh private schools. I then traveled from Massachusetts to California to attend Pomona College in Claremont, California. I entered as a theater major; changed to Theater/English double major; then changed again to a double major in English, in English literature and creative writing. I had enough credits for a Theatre “minor”, if they’d had them.

I spent a semester at the University of London, Birkbeck College, through the Institute for European Studies. I attended on a $6000 grant from the Carnation Foundation. I spent a lot of time in Charles Dicken’s house.

When and how did you discover you wanted to be a writer?

I just always was a writer, from the start. My mother told me I used to play aloud in dialogue from soon after I could talk. She’d overhear me, say, playing with my bear and my dinosaur.

Then they walked over to the garden…

I decided to write fiction in my own voice after writing 7 major non-fiction titles as co-author or “credited ghost.” Writing in another person’s voice made me so frustrated, I had to let my own voice free, finally. I hadn’t really let it free since college.

Tell us about REALITY BOULEVARD. What's the story about? 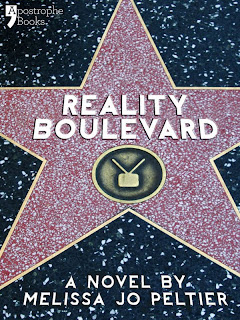 When Oscar winning producer Marty Maltzman's award-winning non-fiction series "Lights and Sirens," is suddenly cancelled after 16 seasons, the quirky documentary filmmaker and his colorful staff find themselves unemployed and out on the streets in an artificial new Hollywood filled with Kardashians, Survivors and Real Housewives. As the collection of oddball characters adapt to a surreal world in which the lines between truth and lies are blurred both on and off the screen, this darkly funny novel reveals an insider’s view of Hollywood and Reality TV.

What is your most memorable moment in your writing career.

Winning the News and Documentary Emmy for writing TITANIC: DEATH OF A DREAM in 1995, a documentary I also produced and directed for A&E. I thought we were such a long shot that I used up all the film in my camera before the award was even called. My late Dad was my “date” as well, which made it extra special.

What problems have you encountered in your career and how did you deal with them?

I think the early rejections for Reality Boulevard stumped me a bit. Most of the publishers who rejected me had only good things to say about the book and rather vague, subjective reasons for rejection (including not knowing how to market). So there was no clear path to rewriting to make it attractive to editors. Since this is my first novel, I was (and still am) very insecure about gauging its real merit – is it good? Is it not? I know as a reader I enjoy it, but without an audience, it’s hard to tell if the rejections were a sign to quit writing, or just a bump along the way. Fortunately, Apostrophe Books loved Reality Boulevard, and they absolutely “got it” the way I intended. Since then, my Amazon reader reviews http://www.amazon.com/Reality-Boulevard-ebook/dp/B00BBF23BW show that there are a lot of others out there who are entertained by it. But the extreme lack of confidence in my own ability – with no real clear path to improving it - was really unsettling for a time.

Did an established writer mentor you in your early days? If yes, how did the mentor help you?

When I was in college, my senior year, I wrote a poem in a creative writing class. I can’t recall its title right now, but it was about conformity in suburbia and how little girls dream of growing up to look like Barbie. (My work had a lot of feminist subtext back then.) When it came time to discuss in class, the writing professor tore the poem apart. Not the style or craft, but the subject matter. He actually laughed at it, saying “Who cares?” Later I heard from a freshman who had this particular professor as an advisor. She told me he often used my poems as examples of what not to write about. Naturally I was devastated, but I had an angel on my side.

That same semester, Adrienne Rich – then my hero as a writer; I’d read all her books – came to the consortium of colleges that included mine and offered a select writing workshop open to only ten students in all the colleges. I was chosen as one of the ten. After my other professor’s ridicule, I remember running all the way to across three campuses to have a meeting with Ms. Rich. She was outraged at the behaviour of the other professor and told me I had real talent, a real voice, and I must never, ever let anyone tell me what I should or shouldn’t be writing. She was a powerful woman and she passionately convinced me to keep writing. We stayed in touch for several years after the class and I feel so blessed and honoured to have known and studied under her. Not to mention having her save my writing from certain death.

What genre do you most often write?

Reality Boulevard is a sort of genre hybrid – a contemporary Hollywood novel that reads like satire. Right now, I’m trying the thriller genre, as thrillers are among the books I love to read and movies I love to see. I haven’t written enough longform fiction to know if I’m going to be drawn to one genre or another yet…I always saw myself as a literary novelist but I’m not sure I’m talented enough to warrant that title.

What other genres have you written?

I guess non-fiction first person “credited ghost” would be my previous specialty, but I’m focusing on my own fiction now

Who are the authors who most influenced your writing and your career?

There are so many, it’s impossible to list in a questionnaire. Charles Dickens, to me, is one of history’s greatest writers. Talk about someone who was born to be a writer – his inexhaustible productiveness had him writing as many as three long serials at one time. Dickens appeals to me because of the humanity in his work, and because somehow, he manages to infuse all his characters – even the worst of them – with a creator’s love and forgiveness. He also was the first great writer to combine the social novel with entertainment – something I aspire to.

Who are the authors your read most often?

Right now I’m reading a lot of thrillers to familiarize myself with the best of the genre, and I really like Kate Atkinson, Tana French, Lisa Gardner Gillian Flynn, Richard Price and Jo Nesbo. I know the Stieg Larssen books get a lot of flack for his “populist” writing style, but the characters he created were incredible. I loved Hilary Mantel’s Wolf Hall and Bring Up the Bodies and I think Jennifer Egan is one of the most interesting writers out there today.

What advice would you give to all up-and-coming writers?

Just write the next word. And tell the truth.

Tell us where we can find you and REALITY BOULEVARD.