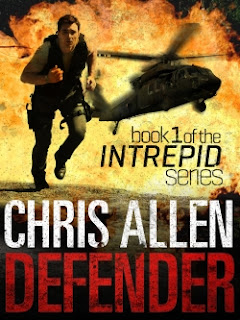 
For me, it was always about writing a series because I was hugely influenced by Ian Fleming as a young kid through till, well, today. Like Fleming’s Bond novels, I wanted to build a fraternity and a relationship with people who liked to read a series… and, most importantly, liked to see films made from their favourite books.
It wasn’t just Fleming and Bond though that I was obsessed with as a boy growing up in Perth in the 1970’s. Throughout that time I developed an encyclopaedic knowledge around all things series-related on television and the big screen.  It almost bordered on an unhealthy obsession. I thank my lucky stars that I still had drumming and running / hockey to keep me active and grounded! But reflecting on it today, it’s these influences that inform my own characters and plot development, so ingrained are they in my psyche.
Some of my favourites in the TV world included The Thunderbirds, the love of which I pass on to my two boys today.  There’s nothing better than having an excuse (in your 40’s) to watch the Tracey brothers flying all over the world to save people. The rockets were just incredible and, let’s face it, Lady Penelope is totally gorgeous. Of course, as a boy, you’re growing up fast and so it’s only a matter of time before you move onto things more befitting you’re age. It was inevitable that The Thunderbirds were discarded (for a while) as I went on to discover new shows and that’s when I stumbled upon the ultra-cool, The Man From U.N.C.L.E.  By then it was the early ‘70’s, so I was seeing the repeats of this classic cult hit from the 60’s featuring secret agents Napoleon Solo and Illya Kuryakin of U.N.C.L.E. This show left an immediate impression on me and I was intrigued by the idea of an agency that was ‘international’; so, in retrospect, it was not such a stretch from International Rescue of The Thunderbirds.  It’s more obvious now that U.N.C.L.E inspired the secret agency of my own books, INTREPID, and I’m thrilled to see that there is talk of a reboot of the series aimed at the big screen in 2013-14, although there’s still some conjecture around who might play the leads.
Another show I used to watch was the cop show Adam 12 which featured the Los Angeles Police and a great duo, Pete Malloy and Jim Reed. I enjoyed this show so much I’d sit too close to the screen for almost every episode, so gripped was I by the police officer’s responses to, what I saw through much younger eyes, as gritty, real-life situations. Of course, around this same period of my life, the opening theme to The Saint, featuring Roger Moore as Simon Templar, could summon me instantly from the opposite end of the house and, just a couple of years later, the theme music to The Professionals would have an even greater impact.  In fact, I was usually to be found fixed to a lounge chair at least ten minutes before that show would even start, urging the rest of the family to get whatever conversation they had left out of their systems or into another room by the time the opening credits appeared on screen. Not all that easy with two older sisters and two younger brothers!  The lead characters of The Professionals, ex-soldier Bodie and ex-cop Doyle along with their boss, retired Major George Cowley, remain staunch favourites of mine to this day for their pervading sense of camaraderie, loyalty, bravado, street smarts and, it must be said, classic 70’s cool.
The lead character of my own series, Alex Morgan, is infused with some of my life experiences and attitudes, combined with the most real and/or heroic elements I could draw from my favourite protagonists such as Bond, Bodie and Templar et al. As a kid, I’d watch them all on the screen or read about them in books and imagine myself vividly in their situations. What I liked most about Bond was that Ian Fleming had used himself as the basis for the character but then had developed him beyond that into a classic hero of fiction.  So, in creating Alex Morgan, I adopted a similar approach. Like me, Morgan is Welsh-Australian, and a former Army officer and paratrooper, with a personal history based loosely on my own experiences.  Of course, I’m nowhere near as heroic and unstoppable as Alex, but serving with the Australian and British Para's, the Australian Federal Police and as a counter-terrorism and critical infrastructure protection expert in the government arena has given me a wide range of source material to draw on for the books.  I’m also incredibly fortunate to have a number of very close friends whom I’ve also added to my characterisations, including Alex Morgan and the ensemble cast that is INTREPID. Unlike me, though, Morgan’s gone on to become this ultra cool ‘part-soldier, policeman and spy’, recruited as the star international agent of INTREPID, the covert-operations division of Interpol's Terrorism sub-directorate.
INTREPID stands for the Intelligence, Recovery, Protection and Infiltration Division of Interpol and was established in the wake of 9/11 to take on criminals in the world's darkest corners. It's my creation, borne not only from personal experience but also decades of thinking, reading and watching all of these favourite shows and films and books and imagining the various scenarios that would eventually emerge from the pages of my own novels.
The series opens with Alex Morgan entering Intrepid in his mid-30's, so by the time I've finished #4 he will be within reach of 40. My intent is that he will naturally age and mature as the series progresses. But you don’t find out everything about him in the first series – you’ll have to wait to get to know him and the other agents, too, as the stories progress. My focus is in developing three-dimensional characters - Morgan and his compadres – something the readers can tease out through the entire series. 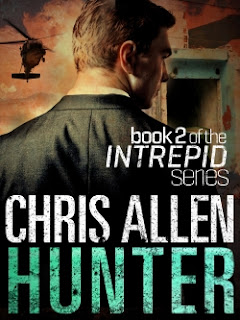 Thus far, the first two novels, Defender and Hunter, have been published by Pan Macmillan Australia's digital imprint Momentum and the third, Avenger, is due out at the end of this year, with the as yet untitled #4 currently in the planning stages. There's even a negotiation underway for a film franchise, so who knows how many missions Major Morgan will take on in total. I’ve always said there are a plenty of missions ahead for Morgan and being a former serving officer I have many ideas about what I’d like to see him do next. I’m sure he’s up for the challenge!
Morgan is an inherently adventurous guy - an agent first and foremost - and while he has a propensity to be melancholic on occasion (due to some of the things he's seen in his time) he considers himself very much a modern age Templar knight, a true 'defender’.
For Morgan and his fellow agents, the life they have chosen is a vocation. That said, he hasn't been able to resist some of the strong, capable women in the stories – such as Arena Halls from the British Foreign & Commonwealth Office in Defender, or Charly Fleming, the internationally renowned classical pianist who was kidnapped by fugitive war criminals in Hunter - but he hasn't committed to anyone permanently. Well, not just yet.
I love thinking about this series, about INTREPID and what Alex Morgan will be up against on each operation. Writing provides the ultimate escape and gives me the opportunity to create new interactions and situations for my series character. But writing a collection of stories in 100,000 word blocks is no holiday. One of the challenges is coming up with believable plot lines that are consistent with my grand narrative for the series, as well as fitting in with the literary look and feel of the series. I like to give each thriller a contemporary backdrop for the agency to sink their teeth into and I try to make my story lines as real as possible, which can be difficult in the action genre when so much has already been done and told. That said, my stories aren’t about an evil genius trying to take over the world - far from it.  Instead, I try to find plot lines based in reality – like gunrunning in Defender, bringing Serbian Warlords to justice in Hunter, or tracking down the architects of human trafficking in Avenger – while still giving them just enough fictional spin to leave the reader with a sense that they could actually happen.
So, in writing a series of novels, I get to develop a whole range of people, situations and events Morgan has to deal with and that is hugely enjoyable. Long term, I think about how these experiences will develop him as a character. Also, with the advent of social media it's easy to converse with readers who like to engage with the complexities of Morgan as a person and an agent - whether it's about his unstoppable-ness, the way he banters with his compadres, or how he reflects on and deals with elements from particularly tough missions.
Morgan’s sole purpose at this point is to establish himself as the new lead agent in INTREPID and that means taking on everything his chief, General Davenport, throws at him. One of the knock-on effects of having Morgan's emotions and personal life put to the side is that he doesn't always have the chance to decompress post-mission. He's not robotic in nature, he's as real to me as the next person, and so that means he can be melancholic as a result. But he doesn't have much time to dwell on it, you see - there's always the next assignment waiting.

About Chris Allen: A former Paratrooper, Government Security and Counter-Terrorism expert, and most recently the Sheriff of New South Wales, Chris Allen's series of thriller novels feature Alex Morgan, star agent in Interpol's ultra-secret sub-directorate Intrepid (Chris’s literary brainchild). His experience of the publishing revolution has been up close and personal, self-publishing before being signed to Pan Macmillan's digital-only imprint, Momentum Books. Defender and Hunter have become instant eBook sensations and Avenger is due for release at the end of 2013, with a film franchise underway.
For more information visit www.intrepidallen.com, or say g’day to Chris at www.facebook.com/intrepidallen. Chris also blogs atwww.intrepidallen.com/blog.
To buy Defender on Amazon: http://www.amazon.com/dp/B009DF1098To buy Hunter on Amazon:  http://www.amazon.com/dp/B009DZKFNK

Posted by Dorothy Dreyer at 7:31 am
Email ThisBlogThis!Share to TwitterShare to FacebookShare to Pinterest
Labels: Chris Allen, guest post, On Writing an Action Thriller Series