Welcome, Gabriel. Tell us a bit about yourself.

I practiced criminal law for 24 years in Montreal. I live here with my wife and two boys, and lead a fairly staid, suburban, middle-class life.

I’ve been writing ever since I can remember, mostly short stories, some poetry and several failed attempts at completing a novel. It was about 10 or 12 years ago that I decided to try to do more than just “write for fun.” I attended a creative writing course, as well as a week-end seminar on screenwriting, and read a few “how-to” books. I also began taking the re-writing process much more seriously, realizing that the first words I put down on the page were not always golden or untouchable. Once I felt confident enough in my work I started submitting short stories to various magazines and on-line reviews, and of course got my share of rejections. I went through the same unhappy experience with my novel, The Guilty. I did finally get two short stories published, which encouraged me to keep going. And, after letting The Guilty gather dust on a shelf for a few years, I decided to put the time into a serious revision, and then self-publish with CreateSpace. I’m quite happy with the final result, but, more importantly, I’ve had some very positive feedback from people who have read the book.

Tell us about THE GUILTY. What’s the story about? 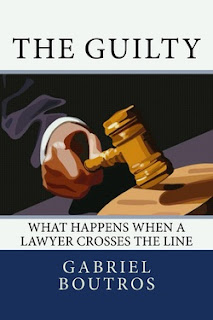 The Guilty is the story of Robert Bratt, a high-powered criminal lawyer in Montreal. He lives for victory in court; he cares little for the witnesses who come under his cross-examination, and not much more for the truth. Bratt’s cynical, no holds barred attitude gets shaken up when he watches the trial of a man who raped a family friend. He sees how the defense lawyer manipulates the facts to put the blame on the victim, and recognizes that this is what he does every day. His own daughter hates him for the kind of man he has become, and cuts off all ties with him. While he tries to deal with his misgivings about how he does his work, and attempts to reconcile with his daughter, he also has to prepare for a murder trial where he has serious doubts about his client’s alibi defense. He’s torn between his need to win at all costs and his own nagging conscience.

I was looking to write a courtroom drama, but I wanted to have the reader care about more than whether the accused was convicted or acquitted. I realized that a conflicted lawyer, who may or may not be acting in his client’s best interest, could up the ante for the reader. It was also an opportunity for me to have my character’s argue issues of ethics and morality that lawyers often have to deal with. Finally, I decided to base the facts surrounding the murder, as well as parts of the trial, on a case I was involved in earlier in my career. I think this helped me keep the courtroom scenes as realistic as possible; at least I hope I was successful in doing that.

I had the book reviewed by a professional copy editor, and also got comments and suggestions from a prosecutor I knew as well as a published author. In the end, the one person I had to satisfy was myself, so I had to rely on my own instincts, and my own willingness to re-read, revise and rewrite the book over a dozen times.

In my short stories, I let the words flow, with only the vaguest idea where the story is going to take me. For The Guilty, as well as the novel I’m presently working on, I do spend a lot more time on plotting and planning. I think you have to when you’re writing a longer work; but, inevitably, the characters still take the story in unexpected directions. At times like that, I trust that they will find a more interesting tale to tell.

The discipline of putting myself in a room and closing the door; cutting myself off from friends and family. Even as I write I often think about the fun I could be having with other people, if only I didn’t have this need to tell my darn stories.

Nothing. The less distraction the better. Sometimes I put on a little music to drown out all other noises, and then I find myself listening to the lyrics. So the best time to write is late at night when everyone is asleep.

A super power I could definitely use would be flying. Then I wouldn’t have to squeeze my 6 foot-four inch frame into those tiny airplane seats!

I hate to sound even more boring than I am, but I don’t know if I ever Googled anything particularly weird.

Quick writing test! Use the following words in a sentence: guilt, quilt, and built.

Surrounded by the furniture I built, I hid my head under my quilt, and tried to forget thoughts of my secret guilt.

Along the meandering path that passes for my writing career, I got support and encouragement from lots of people: Rose (my wife), Lorne, Allen, J.D., Jordan and Carolyn, to name a few. Thanks to all of you for taking the time.

Of course, I have my website, www.storiesbygabrielboutros.weebly.com, where interested readers can learn a little more about me and my fiction writing. The Guilty is also available at all online booksellers: Amazon, Barnes and Noble, etc. I’ve found it listed on some sites I never heard of in countries I never would have expected. It is definitely easy to find.
Posted by Dorothy Dreyer at 12:59 pm
Email ThisBlogThis!Share to TwitterShare to FacebookShare to Pinterest
Labels: crime fiction, Gabriel Boutros, The Guilty