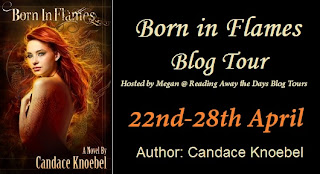 Welcome to a special Sunday post. The blog has been really filling up with requests lately, and sometimes the only way to fit every request in is to post on the weekend. *shrugs* Gotta do what ya gotta do, right?

This special Sunday post features author Candace Knoebel, who's here to talk about her book BORN IN FLAMES.

Welcome to We Do Write, Candace. Tell us a bit about yourself. 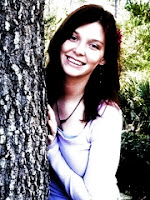 Thank you for having me! I am a stay-at-home mom to two little ones-Logan (my six-year-old) and Scarlett (my two-year-old). They make the world go round. I love music, art, dancing, laughing, good food, scary movies, midnight premiers, lace, Pinterest, Tobuscus, 30 Seconds to Mars…typical normal stuff I suppose. Oh, and I own a pair of Heely’s that I love to roll around in and have a fetish with dying my hair. That’s me in a nutshell.
How long have you been writing?

Tell us about Born in Flames. What’s the story about? 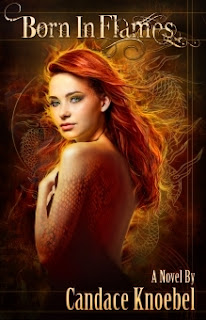 Born in Flames is a fast-paced fantasy that will catapult you into a world where you race against time to save the fate of two realms and an impending prophecy promising death. Aurora Megalos is the main character who discovers that she is not only a part of this prophecy, but part dragon as well. It is the beginning chapter of her journey to becoming the Progeny and fulfilling her destiny of defeating an ultimate evil.

I had previously thought of it in 2007, but never tried to sit down and write. Probably because I didn’t think I could. It came back to me in 2009 after I finished a series that left me feeling empty when complete. I didn’t want to read anything else for awhile and for some reason, the idea popped back up and I figured I would write some of it down. At that point in time I had no idea that it would shape into a novel, thusly changing my goals in life.

My best friend always reads my work and gives her opinion. My publisher provides an editor and then provides her opinion as well. So two editors and one beta reader. For now.

I would say I am 50/50. I map out a general idea of where I want each book to go and then let everything else come to me as I write. This does sometimes change my original plotting, but it doesn’t bother me. I like the freedom to change tactics.

Remembering everything. I have tons of notes that I keep open alongside of each novel I write. I have to continually skim through them to remind myself of smaller plots that need to be resolved and/or people who may have been forgotten along the way.

Water, music, and my phone.

That would be a great one! What's the weirdest thing you've googled?

Single letters just to see what the trending topics were.

Quick writing test! Use the following words in a sentence: flames, fluent, and fling.


Flames fling from my fingertips in a fluent manner as I aim for the one who threatens my life.

Finish this sentence: If I'm not writing, I'm probably ...
…watching one of my favorite TV shows or cleaning my house.

I am eternally grateful to all of my fans who have supported me throughout this process. I would also like to thank I Heart Books, Paranormal Reads, Tsk Tsk What To Read?, Dangerous Romance, Book Addicts Not So Anonymous, Sapphyria’s Book Reviews, So Many Books So Little Time, One More Chapter, Sonya Loveday, and Jessa Markert. There are so many more, but that would take pages.

Amazon, Barnes & Noble, and Kobo for right now. The print version is in formatting and will hopefully be finished by the end of this year!

Posted by Dorothy Dreyer at 1:39 pm
Email ThisBlogThis!Share to TwitterShare to FacebookShare to Pinterest
Labels: Born in Flames, Candace Knoebel, YA Paranormal

Always love your interviews. The premise for this sounds really cool.