Happy Hump-day, folks! Beth, here. I'm excited to announce the release of SONGSTONE, a YA Fantasy novel by Lena Goldfinch which released this week! Check it out! 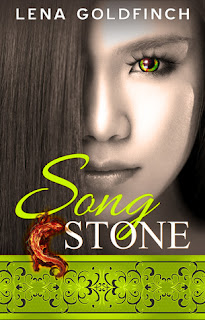 Kita can meld song into stone. In a world with no written word, storytelling—the ability to meld (or magically impress) song into stone—is greatly honored. The village honors her master as their medicine man, but Kita knows he's secretly a sorcerer who practices black magic using drops of her blood. She fears he’ll use her beautiful gift for a killing spell, so she conceals it from him. Each day, his magic tightens around her neck like a rope. His spells blind the villagers, so they can’t see him for what he really is.

Not that anyone would want to help her. She was found in the forest as a baby and would have died if a village girl hadn't brought her home. But the villagers saw Kita's unusual coloring and decided she belonged to the mysterious tribe who lives in the forests of the volcano, a people feared for their mystical powers. So they fear her too. Now seventeen, she can barely admit her deepest longing: to know who she really is and where she belongs.

Then Pono, a young journeyman, arrives from the other side of the island. He's come to fulfill a pact between their villages: to escort a storyteller back to his village--a storyteller who'll be chosen at the great assembly. Finally, in Pono, Kita sees her one slim chance at freedom and she'll risk her life to take it.

A dark, twisty tale of sorcery, tummy-tingling romance, and adventure, inspired by the folklore of New Zealand's Māori people.

Sounds fantastic! Right? You can download SONGSTONE for just 99 cents at Amazon. Or, if Amazon is not your thing, you can get it at Barnes & Noble.

Posted by Elizabeth Holloway at 7:45 am
Email ThisBlogThis!Share to TwitterShare to FacebookShare to Pinterest
Labels: book release, Lena Goldfinch, YA Fantasy

Congrats to the author! AS for the story, definitely sounds promising and I'm loving the cover. *throws confetti*