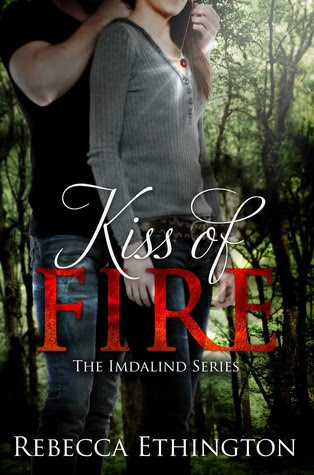 Kiss of Fire, the swift moving first book in the Imdalind series by Rebecca Ethington made me smile, a lot. From the begining, Jocyln, the 16 year old protagonist, comes off as a full fledged character full of strengths, quirks, insecurities, and an unusual combination of self assured boldness and a deeply ingrained compulsion to avoid notice. Throughout the Kiss of Fire, I enjoyed watching Jocyln overcome the walls she's built around herself and begin to learn how to let people in and even trust.

Estranged from the father who walked away after her mysterious childhood coma, seemingly because of the bizarre scar that was the only physical reminder of that time, and living with the hardworking mother who still loves her ten years absent husband, Jocyln spends a lot of time home alone or hanging at her mom's workplace, the kitchen of an outrageously wealthy man whose son became her only friend.
Of course, even best friends keep secrets, and Jocyln is hiding more than her fateful scar under her hoodie. She's also hiding the burden of her missing father's apparent madness, her own fears regarding her sanity, and the feelings she knows can come to nothing. Of course, those are small secrets compared to Ryland's.

Ethington's approach to the ubiquitous wealth and privilege endemic to the genre surprised me. As soon as I read that Jocyln's world lies tangent to the extremely wealthy and powerful family for whom her mom works, I worried that the story would devolve into a tag-along tale in which a regular girl from a working family background gets to spend her time with the extremely privileged. Let's face it, we all read Twilight, and as a reader, I can only take so much "I'm not worthy." That's why I was delighted that in Kiss of Fire, while there are times when they come out and say "you're not worthy," Jocyln never took that notion into her personal world view, and neither did her best friend, said wealthy, handsome, smart, funny, able bodied Ryland. I was even more delighted as the plot unfolded and the heavy cost of Ryland's privilege unfolded.

I'm a big fan of leading ladies who make their own decisions, and while just about everyone tried to boss Jocyln around, and though she did, ultimately, tend to comply, she did so with agency. I liked the way that Ethington dealt with Jocyln's emotions, particularly dealing with her transition from living in the world as we know it into one in which magic is not only a very real force, but a part of who she is. I enjoyed this book, and am looking forward to the second in the series.

Sounds cool! Thanks for the review, Sandra!