The Puppet Spell, a through the looking glass styled otherworldly adventure by Emma L. Adams, begins in the all too familiar everyday nomadic world all too familiar to so many of today's youth: uncertainty, guardianship, eviction, strained family relationships, and high school. Of course, when your uncle has an enchanted secret laboratory and a pet cat with an uncanny understanding of what is going on around him, those mundane details can't stay humdrum for long. Told from the point of view of Lexa, a dependable, geeky, and imaginative girl whose twin sister, Lucinda, is anything but, The Puppet Spell is told with awe and excitement for adventure. 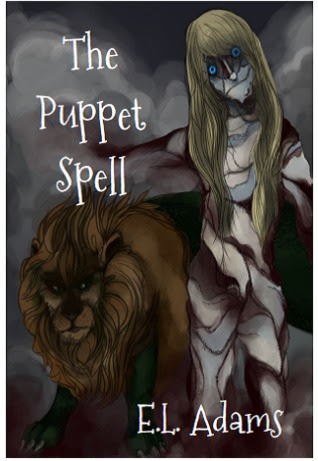 When Lucinda steals an invisibility potion from her uncle's secret cache of otherworldly items, Lexa, with the help of her trusty guy-friend Marlon, sets off on the adventure of her life to try to find her sister, accompanied by the house cat who is more than he seems. In the other world they'll discover deception, illusion, political intrigue, magic, and that their frumpy uncle was never really a computer tech, all of which will bring Lexa's family closer together, and leave them sundered in ways she never could have forseen when they first moved into the flat with the secret room.

I enjoyed Adams' world building, and that the tone, pace, and movement of the story reminded me so much of role playing. The Fae's reliance on illusion to sculpt the world around them reminded me of the meticulous nature of a Game Master's world building, and that set this book apart from other stories in which a group of adventurers goes on an adventure that no one back home would ever believe.  If you decide to go along with Adams, be forewarned, you may never look at long walks through the woods quite the same way.
Posted by Slee at 5:00 am
Email ThisBlogThis!Share to TwitterShare to FacebookShare to Pinterest
Labels: E L Adams, Emma L Adams, fantasy, illusion, magic, review, reviews, The Puppet Spell, YA Fantasy