Review: Awakened: The Legends of Elyndia, by Kriston Johnson 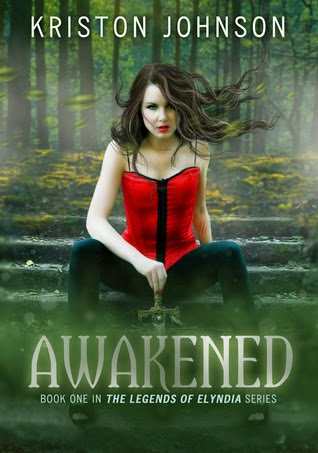 Awakened: The Legends of Elyndia, is the story of Jade, a girl who was just trying to make it through high school without anyone causing trouble or sending her back to a shrink over the otherwise not too horribly-unusual detail that she kinda sorta sees demons starts out with an average day of drama filled school and goes down hill rapidly when her makeshift family is attacked in an abduction attempt and Jade is pulled into another realm by her would be assassin. From there, it doesn't really let up until the end.

Awakened surprised me. Just when I would start to decide that it was altogether becoming predictable, Johnson would throw a curve ball that I didn't see coming, and I admit, I liked that. Well, usually. Most of the time even. All but one. You can make up your own mind, but I sort of wanted to slap someone for acting without thinking just that once.
If you're reading this, you like fantasy, so it's not really a spoiler to say, "when dealing with faeries, choose your words wisely."

Yes, faeries. Faeries, demons, elves, elementals, angels, and all the beings of myth and high fantasy that you've learned to love over the years enmeshed in a struggle to save a world within a world from the vile tyrant Draven who would use Jade's latent powers to unleash all of the demons into the world in order to regain something once lost.

All in all, I liked the characters, and the world seems interesting, though Johnson left me with a lot of questions about Elyndia that I'm hoping she answers in the second installment in her series. I also hope to see more character development on the part of Jade and to learn more about the rakish Elemental who betrayed her.

Check out more reviews on Goodreads. Awakened: The Legends of Elyndia is also available on Amazon and from Barnes & Noble.

I received a copy in exchange for my review.

Posted by Slee at 5:00 am
Email ThisBlogThis!Share to TwitterShare to FacebookShare to Pinterest
Labels: Awakened, high fantasy, Kriston Johnson, reviews, YA