Yesterday marked the release of The Treatment, the much anticipated sequel to The Program by Suzanne Young! Happy (belated) Book Birthday! 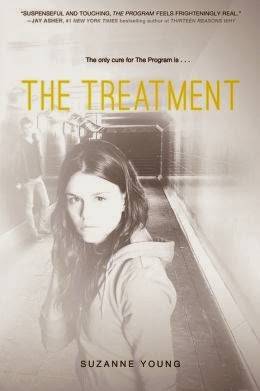 Can Sloane and James survive the lies and secrets surrounding them, or will The Program claim them in the end? Find out in this sequel to The Program, which Publishers Weekly called “chilling and suspenseful.”

How do you stop an epidemic?

Sloane and James are on the run after barely surviving the suicide epidemic and The Program. But they’re not out of danger. Huge pieces of their memories are still missing, and although Sloane and James have found their way back to each other, The Program isn’t ready to let them go.

Escaping with a group of troubled rebels, Sloane and James will have to figure out who they can trust, and how to take down The Program. But for as far as they’ve come, there’s still a lot Sloane and James can’t remember. The key to unlocking their past lies with the Treatment—a pill that can bring back forgotten memories, but at a high cost. And there’s only one dose.

Ultimately when the stakes are at their highest, can Sloane and James survive the many lies and secrets surrounding them, or will The Program claim them in the end?

Suzanne Young currently lives in Tempe, Arizona where she teaches high school English and obsesses about books. She's the author of A NEED SO BEAUTIFUL, A WANT SO WICKED, and THE PROGRAM. Learn more about Suzanne at www.suzanne-young.blogspot.com

Posted by Elizabeth Holloway at 11:32 am
Email ThisBlogThis!Share to TwitterShare to FacebookShare to Pinterest
Labels: book release, Suzanne Young, The Program, The Treatment