Review: Son of a Mermaid by Katie O'Sullivan 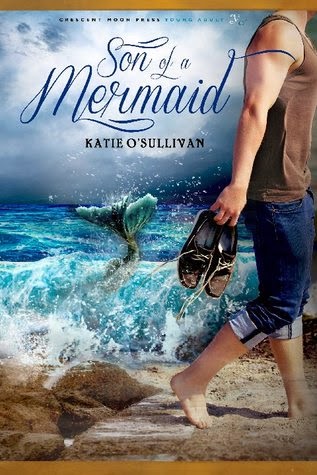 Son of a Mermaid
by Katie O'Sullivan
Crescent Moon Press

Shea MacNamara's life just got complicated. After a freak tornado devastates his Oklahoma farm, the fifteen-year-old orphan is whisked away to Cape Cod. Struggling to make sense of his new surroundings, he's trying hard to deal with feelings of abandonment... and the emotions stirred by a girl he meets along the shore.

Kae belongs to an undersea world hidden from drylanders. The daughter of royal servants, she knows the planned marriage of her Princess to the foreign King should put an end to the war between the clans. But two things stand in the way of lasting peace: the ambitions of the foreign King's regent, and rumors of the Princess's bastard child. Sparks fly when she meets Shea, but could the cute drylander really be the Son of a Mermaid?

I don't think I've ever read a mermaid book before. I remember watching the original Little Mermaid movie (long before the Disney movie came out), but as far as books go, mermaids were new territory for me. That said, I really loved this book.

Shea's character is someone the reader can immediately sympathize with. A tornado claims his father, and because his mother "abandoned" him when he was young, Shea needs to move to Cape Cod to live with his grandmother. That's when he meets Kae. Soon things move forward until Shea discovers not only is Kae a mermaid, but he's the son of one. But the plot goes deeper when Shea discovers there's a secret war taking place below the ocean's surface.

O'Sullivan's description of an underwater world was intriguing, and I felt as though I was right there swimming along with Shea and Kae. I love the image the writer's words created in my mind when the two main characters' legs transformed to mermaid tails. There's plenty of drama and tension too, as the main characters attempt to disrupt the betrayal and scheming taking place in the royal underwater kingdoms.

This was a great read, and I can't wait to read the sequel. I recommend it to anyone who's into mermaid tales (pun intended) and those looking for a different spin on a paranormal read.

Thanks so much for the wonderful review!

Congratulations on a wonderful review Katie! I look forward to reading Son of a Mermaid