Today we're taking part in the OF BREAKABLE THINGS blog tour by speaking with author A. Lynden Rolland. Join us as we get to know her and learn about her book!
Welcome to We Do Write! Thank you for joining us. Tell us a bit about yourself.

Thank you so much for having me! I love your site!
A bit about me. I’m a teacher, a tutor, a mother, a runner, a gymnast, a worrier, a perfectionist, and a now an author.

I started keeping journals when I was little. Writing became therapeutic. It’s how I organize my mind. (Maybe that’s why my characters in Of Breakable Things have the ability to shuffle through their thoughts like notes in a card catalog.)

I began writing Of Breakable Things a few years ago. When my first son was born, I took a leave of absence from teaching high school English. My son was such a horrible sleeper that often I only had my imagination to keep me company during the endless nights of rocking and sitting the dark. When he was eight months old, I began to write down the story my mind had created.

Tell us about OF BREAKABLE THINGS. What's the story about? 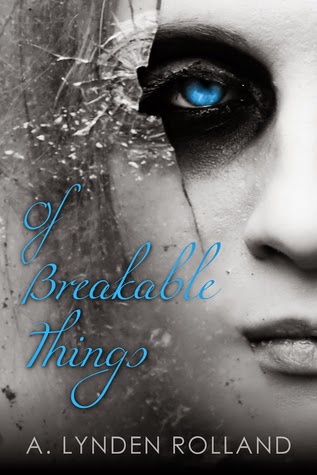 Of Breakable Things is about the fragility of life and love but also about the fragility of perspective.
My main character, Alex Ash, suffers from vascular Ehlers-Danlos Syndrome. Her tissues can’t properly support her organs, and her bones break easily. Regardless, she tries to keep up with her best friends, the boys next door. When tragedy strikes, Alex’s illness becomes a blessing in disguise, but death isn’t nearly as peaceful as she imagined.
Without a body, Alex’s world is dictated by her mind, but her mind is more than a little cracked. Reality is manipulated by perception, and that’s even more powerful when the mind is boundless.
Amazon | Barnes & Noble | Kobo | The Book Depository | IndieBound

I can’t pinpoint one thing, but I had an idea that wouldn’t leave me alone. I thought about how much people love things. How much people hate things. How much knowledge they gain in a lifetime. I couldn’t imagine that when the body died, that all of the mental energy just … disappeared. So I started thinking that maybe those emotions and that intelligence could come alive into a projection of a person.
Then I needed characters. I needed a girl who would die prematurely, to be physically breakable. And once I began researching Ehlers-Danlos Syndrome, Alex came alive in my mind. And Chase Lasalle just appeared there beside her one day, holding her hand.

Do you have critique partners, beta-readers, or do you self edit?

I edited Of Breakable Things myself but only because I didn’t tell anyone I was writing it. I didn’t begin the manuscript with the intent to be published. I think everyone benefits from critique partners, so I should probably start looking for one, huh? I do have beta-readers, though. I trust them to let me know what makes sense and what doesn’t. What dialogue seems forced or fake.


What do you absolutely have to have nearby while writing?

If you could have any superpower what would it be?

The power to eat doughnuts and never get fat, haha. Wouldn’t that be amazing?

The government is probably tracking me. Let’s leave it at that 

They ran wild through the flower fields, disregarding the judgmental eyes, and their fingers intertwined to fight the breakable force of adolescence.


Finish this sentence: If I'm not writing I'm probably ...

LOL. Who would you like to thank for supporting you throughout the publishing process? Let's hear your shout outs!

Thank you so much for having me!
ABOUT A. LYNDEN ROLLAND: 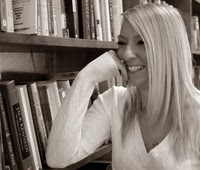 A. Lynden Rolland was born and raised in Annapolis, Maryland, a picturesque town obsessed with boats and blue crabs. She has always been intrigued by the dramatic and the broken, compiling her eccentric tales of tragic characters in a weathered notebook she began to carry in grade school. She is a sports fanatic, a coffee addict, and a lover of Sauvignon Blanc, thunderstorms and autumn leaves. When she isn’t hunched behind a laptop at her local bookstore, she can be found chasing her two vivacious children. She now resides just outside Annapolis with her husband and young sons.

Posted by Dorothy Dreyer at 6:25 am
Email ThisBlogThis!Share to TwitterShare to FacebookShare to Pinterest
Labels: A Lynden Rolland, blog tour, chapter by chapter, interview, Month9Books, Of Breakable Things, YA Paranormal

Amy, you're so awesome! This book is gonna blow the socks off people! Also, you're adorable. Seriously. And a big, fat D'AWWW to the goat posse shout-out! <3 you back!

Yay that's my name up there! So exciting! I can't wait to read this book, you are full of sweet adorableness!

Thank you so much for having me! Such fun questions!

Whoo hooo! A big posse Shout-out! Can't wait to read this book girlie! The premise is haunting and yet so intriguing...I just CAN'T WAIT. :D
Looking for an ARC in the mail soon!
Big hugs! -Red

I am so, so, so excited about this book! The premise just kills me... I love unreliable narrators and shifting perceptions. I also can't look away from this amazing cover!

i cannot WAIT to read this book! the cover is so haunting and Amy is such an amazing talent - i'm salivating for the release date!!! nice interview, btw!