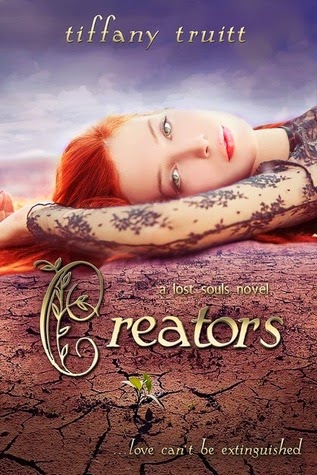 Creators, the third book in Tiffany Truitt's dystopian saga of love, loss, and survival, Tess' story delves further into questions that matter not only to a young woman trying to survive in a world that has decided her kind is worth less than nothing, but resound in modern daily life as well: what does it mean to be a family, what makes someone human, how does love change a person, and what exactly is this thing called womanhood, and how can or should it define one. Interestingly, Creators probes myriad faces of womanhood from political, emotional, and social perspectives, all within the context of a world in which pregnancy, as often as not, is a death sentence.
As with many books that deal with women's sexual roles set in post apocalyptic patriarcal dystopias, Creators deals heavily with issues of bodily autonomy, reproductive rights, and consent in a way that, at times,  reminds me of Margaret Atwood's The Handmaid's Tale. Truitt has an interesting way of addressing the social programming and propaganda that conditions people who are systematically being abused into not even realizing they're being abused through the kind of rape culture Tess observes as a direct result of the health crisis facing pregnant women in Tess' world.  In dealing with Tess and her father's relationship, it put me in mind of Dearly Departed, while raising the question, once again, at what point does one's responsibility to one's blood family stop, and their wider responsibility to one's species begin? Aside from the social justice issues which permeate Creators, Truitt writes with momentum and energy, propelling the story from one confrontation to the next.

Of course, as Creators is the third book in the Lost Souls trilogy, you'll want to start with Chosen Ones, work your way through Naturals, and finish with the unexpected and rather breathless plot twists in Creators. Yes, I'm admitting that I was surprised, and it was good to be surprised.