Yesterday marked the release of YA Dystopian DARK DAYS by Kate Ormand. Take a look at what the book's about. 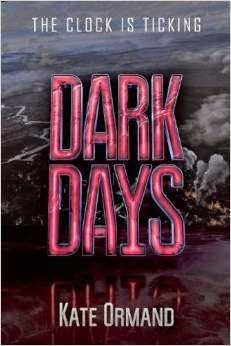 The future world has been divided into sectors—each the same as the other. Surrounded by thick steel fences, there is no way in and no way out. Yet a cyborg army penetrates each sector, picking off its citizens one by one, until no one is left. Behind the sectors’ thick walls, the citizens wait to die. Few will be chosen to survive what’s coming; the rest will be left behind to suffer. A new world has been created, and its rulers are incredibly selective on who will become a citizen. They want only those with important roles in society to help create a more perfect future.

Sixteen-year-old Sia lives in one of the sectors as part of a family that is far too ordinary to be picked to live. According to the digital clock that towers high above her sector, she has only fifteen days to live. Sia has seen the reports and knows a horrific death is in store for her, but she is determined to make the most of her final days. Sia refuses to mourn her short life, instead promising herself that she’ll stay strong, despite being suffocated by her depressed mother and her frightened best friend. Just when Sia feels more alone than ever, she meets Mace, a mysterious boy. There is something that draws Sia to him, despite his dangerousness, and together, they join a group of rebels and embark on an epic journey to destroy the new world and its machines, and to put an end to the slaughter of innocent people.