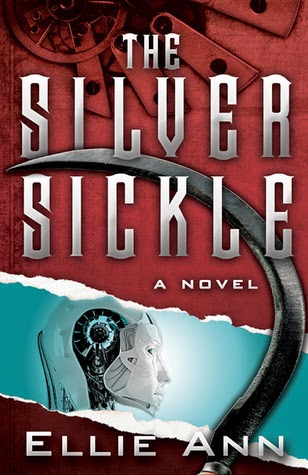 In a world oppressed by false gods who seem to see to the heart of one's every impulse, Ellie Ann constructs a brilliant cogwork puzzle of characters, technology, motives, and hope. I don't use the term cogwork lighty here. When I'm not reading you can probably find me tinkering with something steampunk. Yes, we have conventions. Yes, I attend them. So, when the opportunity to review a somewhat steampunk YA science fiction novel came across my desk, I was oddly enough, a little terrified. Nonetheless, my curiosity won out, and thank goodness, because the World Building made me want to squee like a fangirl. Ellie Ann's writing didn't take me by the hand and explain every detail of her created society to me, instead she sat me down in it and made it so rich and full that while it was different, and oh, was it ever different, there were enough details that I could quickly merge with the story and enjoy learning about the culture she'd created, rather than feeling thrown from the book with tired explanations.

It wasn't just her world building though. Her characters have depth, idiosyncrasies, and world views that are simultaneously easy to relate to, but entirely foreign. Within the first three chapters I was emotionally invested, not only in the fate of Farissa and Zel, as individuals but also as a pair, but also in Gira - in trying to better comprehend these alien would be gods who had set themselves above even the rulers of men - and also the cogsmen, whose unique position somewhere between man and machine both intrigued me and raised so many ethical and technical questions.

I like this book because it was exciting, and it gives the reader something to talk about. Any YA book clubs out there? Looking for good science fiction that will provide ample ammunition for long conversations about civic duty and personal responsibility, individual versus group ethics, imperialism, exploitation, agency, and cultural
oppression. I like this book because it raised my heart rate and kept me up far later than I wanted to be up, despite the fact that I had class the next day.

Best of all, I love that when I finished this book, it was over. It is a stand alone novel, and while I'd love to read more about the Amar, I am a big fan of stand alone novels. This is definitely a good book for readers who not only enjoy science fiction, but like their female main characters adventurous, quick witted, and big hearted, and their male main characters  to be made of the awkward but loyal and mechanically brilliant sort of stuff that other heroes only dreamed of while trying to fix the hinge on a door.

The Silver Sickle is available through Amazon and Barnes & Noble.

The end of humanity will come through the Silver Sickle . . .

Farissa lives every moment with reckless abandon, for it may be her last. Any day now, the alien goddesses will harvest her and take her to the mysterious Silver Sickle, never to return. She’s accepted that. What she can’t accept is this new idea of freedom Zel has planted in her head. She’d give almost anything to be with Zel, but how can she run from her destiny if it means putting the whole kingdom in danger?

Everyone in the desert kingdom believes the goddesses are immortal, but Zel has invented a way to kill them. Now all he has to do is convince Farissa to run away with him and plant a seed of hope in her heart that she’s not destined to die. Little does he know that one seed of hope could change the course of the future.

I was born in the jungles of Thailand, was raised in a small farming village in Iowa, lived in the middle of a Texan desert, and now abide in the Ozarks.
I like writing fairy tales, tall tales, thrillers, science fiction, and am seriously interested in transmedia storytelling.

I’m a creative editor for Stonehouse Ink. I’m a producer of interactive books at Noble Beast.

Come say hi! I don’t bite. Unless I’ve been turned into a zombie.

oh my goodness! This review just made my day. I'm so glad you enjoyed The Silver Sickle.
I hope you have a wonderful day!!

We totally need more stand-alones I love them too! And this one sounds like a really exciting read! I love sci-fis but sometimes the world is just too odd or full of holes, but this one sounds like it was really well built without sacrificing character development either! Great review, Sandra!