Today, my baby girl turns sixteen! Crazy, right? Where did the time go? 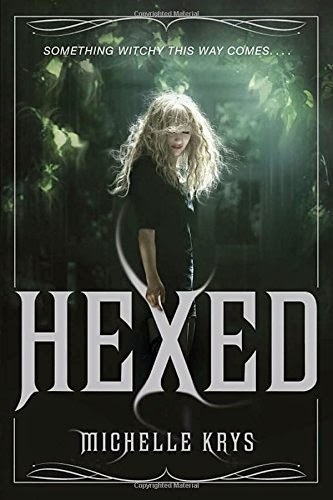 It's The Craft meets Bring It On in Hexed, the first novel in a brand-new series from debut author Michelle Krys in which a snarky sixteen-year-old cheerleader is forced into a centuries-old war between witches and sorcerers only to uncover the first of many dark truths about her life...

If high school is all about social status, Indigo Blackwood has it made. Sure, her quirky mom owns an occult shop, and a nerd just won't stop trying to be her friend, but Indie is a popular cheerleader with a football-star boyfriend and a social circle powerful enough to ruin everyone at school. Who wouldn't want to be her?

Then a guy dies right before her eyes. And the dusty old family Bible her mom is freakishly possessive of is stolen. But when a frustratingly sexy stranger named Bishop enters Indie's world, she learns her destiny involves a lot more than pom-poms and parties. If she doesn't get the Bible back, every witch on the planet will die. And that's seriously bad news for Indie, because according to Bishop, she's a witch too.

Suddenly forced into a centuries-old war between witches and sorcerers, Indie's about to uncover the many dark truths about her life--and a future unlike any she ever imagined on top of the cheer pyramid.

Happy Birthday to your daughter - what a special one too!
And congratulations, Michelle. Not only is the cover gorgeous, but it sounds amazing :)