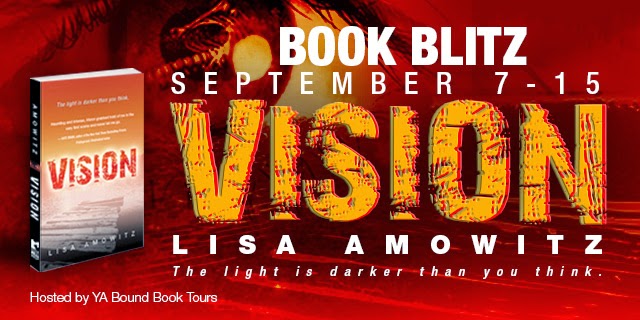 Today we're taking part in the book blitz for VISION by Lisa Amowitz. Take a look at this awesome-sounding YA paranormal thriller. 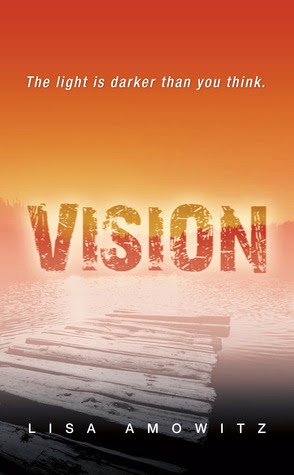 The light is darker than
you think…

High school student Bobby Pendell already has his hands full—he works almost every night to support his disabled-vet father and gifted little brother. Then he meets the beautiful new girl in town, who just happens to be his boss’s daughter. Bobby has rules about that kind of thing. Nothing matters more than keeping his job.

When Bobby starts to get blinding migraines that come with scary, violent hallucinations, his livelihood is on the line. Soon, he must face the stunning possibility that the visions of murder are actually real. With his world going dark, Bobby is set on the trail of the serial killer terrorizing his small town. With everyone else convinced he’s the prime suspect, Bobby realizes that he, or the girl he loves, might be killer's next victim.

Excerpt
Suddenly, the café had become suffocating and Bobby felt the urge to run. Anywhere. But he wasn’t ready to go hanging around the laundromat and increase his odds of running into Gabe. Instead, he took a huge bite of sandwich to keep himself from blurting something rude.

Dana pulled the newspaper toward her, a cascade of stringy hair hanging in her face. Between the strands, Bobby could see her pouty lips move as she read. “My cousin Rosemarie knows this girl,” she said finally, her gaze still trained on the article. “And now the State Police have pulled Daddy into the case…whoops!” Dana clamped a hand to her mouth. “I shouldn’t have said that. Daddy told me never to talk about official police business.”

Bobby leaned forward, angling the paper so he could look at it again. “Why? Is it a murder investigation now?”

Bobby rolled his eyes. “Figures. The one time Dana Barclay has something to say, she’s under a gag order.”

Dana’s eyes flashed to his, something cold and sharp behind the softness, like a needle tucked inside a cotton ball. “Why are you so interested, Bobby?”

“Why not? Nothing ever happens in Graxton.”

“You think a girl disappearing is cool?” Dana stared at him, the corners of her mouth tugged downward. It was a known fact that her father, Sheriff Barclay, hated Bobby’s dad. Chuck Barclay and Sam Pendell had been bitter rivals in high school, a feud that continued into their adult years. Somehow, Dad had always managed to keep a step ahead—until he landed in a wheelchair. Hate like that, Bobby thought, doesn’t just go away. It goes underground and festers, eventually seeping into everything.

Dana stood abruptly. “I have to go. Daddy’s picking me up in five. Movie night in Kingston.”

“Have fun,” Bobby said under his breath. Dana glared at him, face flushed, nostrils flared.

After Dana had left, Coco drummed his fingers on the tabletop. “What the hell was that? I know you two aren’t best friends, but can you at least try to be civil?”

“Sorry. I don’t know what’s got into me today.”

Coco frowned. “You sure you’re feeling okay? You look pale, like the skin on your ugly mug is pulled too tight around your skull.”

Bobby cleared his throat and wondered if the day’s strains showed that clearly on his face. “I’m fine. I was just curious, is all. It’s weird, isn’t it, that they’re keeping it all hush-hush? I wonder what’s really going on.”

Coco slanted his head, still gazing at Bobby with his piercing stare. Bobby knew the prospect of a riddle would be too tempting for his friend to pass up. But just why he was so curious, Bobby couldn’t begin to explain.

“I can ask him for you, if you like,” Coco said. “Barclay’s always tripping over himself to be nice to me. I’ll just kind of mention that Dana is upset by the whole thing. See if he bites and throws me some inside info.”
“No! I mean, never mind. I just thought, if you’d heard chatter…”

“So now I’m Homeland Security.” The glint in Coco’s eye was back and Bobby knew he was forgiven. Coco never stayed mad long.

Bobby threw a piece of lettuce at Coco’s head. A crust of bread sailed back at him. Pete started barking and then Aaron rushed over, picked up a napkin and put it over Coco’s eyes, yelling, “Pirate attack!”

Bobby laughed hard as the memory of their years of zaniness washed over him in a warm wave. He joined Aaron in the attack, and helped pull Coco from the chair to the floor. Pete got busy licking everyone, the three of them wrestling and laughing on the floor like puppies.

Jerry’s voice cut through the mayhem. “Excuse me, boys. We seem to have another customer.”

From the tangle of bodies, Bobby looked up. Arms folded, Gabe stood smirking from the doorway. In the confusion, he hadn’t heard the jangle of the door opening. “Looks like fun. Mind if I join in?”

Coco was on his feet in an instant and, smoothing his rumpled clothes, lunged toward her in a few long-legged strides.

“Welcome! Can I get you anything, madam?” He pulled out a chair at the nearest table and gestured toward it. “Please, have a seat! I’m Coco, otherwise known as James Woods, no relation to the actor of the same name.”

Gabe giggled. “Nice to meet you. I’m Gabriella. But call me Gabe.” Bobby sighed. It was no contest. He could never outshine Coco when it came to charm. In this case, maybe that was a good thing.

About the Author
Lisa has been a professor of Graphic Design at her beloved Bronx Community College where she has been tormenting and cajoling students for nearly seventeen years. She started writing eight years ago because she wanted something to illustrate, but somehow, instead ended up writing YA. Probably because her mind is too dark and twisted for small children.