Book Blitz: Pieces of Me by Kira Adams

Today we're taking part in the PIECES OF ME book blitz. Check out this YA contemporary, take a gander at the excerpt, and don't forget to enter the giveaway! 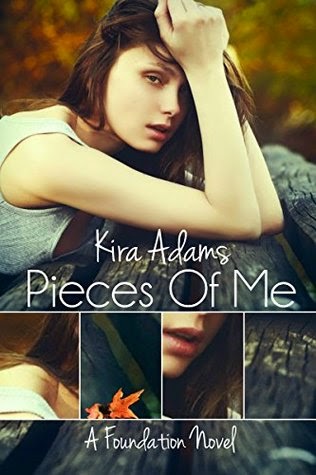 For sixteen year old Peyton Lane, life has never been easy. She’s not popular, overweight, and oh yeah, her sister is embarrassed of her. But over the course of a tumultuous year, everything changes for Peyton.

Suddenly all eyes are on her and it’s not because she’s fat. From a pair of handsome twins to a couple of dangerously sexy rockers,Peyton will have to find out who she can trust with her heart. From the ups and downs to the twists and turns—this is Peyton’s story of finding one’s voice and growing into your own.

This is a coming of age romance that involves realistic situations and raw emotions. This is Pieces of Me.

“Do I know you?” Jax asked, stumbling back and forth.
“We have like four classes together…and I’m pretty sure you and my sister had a thing freshman year,” I replied, positive he couldn’t have been drunk enough to forget I even existed…or could he?
“Oh.” He raised his eyebrows animatedly, his blue eyes twinkling. “Satan, right?”
“Excuse me?” I asked, shocked by his question.
“Your name—or at least that’s what your sister used to call you…” His lips curled up into an evil smile.
I let go of his arm, but stood my ground. “Why are you being like this? You invited me,” I whispered, looking down, my face burning up.
Jax obviously did not get the memo that we were being discreet, because his volume only seemed to increase, catching more attention than I would have liked. “I invited you? In what world?” He cackled like an evil villain and then turned his back to me, filling his cup up with beer.
My cheeks were growing redder by the minute, a combination of embarrassment and pure rage. He was the only reason I had even agreed to come. I knew I was an outsider; that I didn’t fit in with his crowd—but he was the one who convinced me that everything was going to be alright. “You’re seriously going to sit there and pretend like you didn’t invite me to this party twice?” It was hard not to be fuming.
He turned around slowly this time, sipping on his beer, a calculated look playing across his eyes. “Well you obviously can’t take a hint…I’m going to give you the best advice of your life…are you ready? Lay off the cupcakes fatty! I can get any girl in here, what would I want with a pig like you?”
I looked around and realized all eyes were on us; more importantly, me. Jax had just given them the reality TV bit they craved for the night. Tears were beginning to form at the corners of my eyes and I knew I didn’t have much time before the waterworks. “Peyton…” I heard my friends call after me. But it was drowned out by the noise of laughter. Jax was laughing hysterically at what he had just said to me, and the worst part about it? Everyone had joined in. Now all I heard as I ran and pushed my way through the crowd was oinks and laughs.

Krista Pakseresht has always been a dreamer. From the first time she opened her eyes. Creating worlds through words is one thing she is truly talented at. She specializes in Young adult/New adult romance, horror, action, fantasy, and non-fiction under the pen name Kira Adams.

She is the author of the Infinite Love series, the Foundation series, the Darkness Falls series, and the Looking Glass series.

Posted by Dorothy Dreyer at 7:57 am
Email ThisBlogThis!Share to TwitterShare to FacebookShare to Pinterest
Labels: book blitz, excerpt, Kira Adams, Pieces of Me, YA Contemporary