Discover the truth- redefine self- save the realms- count me in. Coral & Bone by Tiffany Daune was a compelling read. It kept me awake, even when I couldn't afford to stay up. I'd tell myself "just one more chapter," over and over again, then find myself thinking about the characters long after I'd set it down. This was never going to be a one sitting book for me because every few chapters the need to get back in the water would be too strong, and I'd simply have to go swimming. I suppose other than *spoilers* it would almost make an ideal bathtub book.  Naturally, reading about mermaids and sirens, and the watery realm of Elosia made me want to immerse myself- my family jokes that I'm a bit of a mermaid myself. It might have something to do with the fact that I sometimes swim in a mermaid tail- dead serious. Of course, in Coral & Bone, being a mermaid is not even remotely a positive thing.

As I wrote on Biblivoracious when I couldn't wait another minute to share my opinions after finishing this book, in Coral & Bone, Halen, a nearly 15 year old girl, finds herself having returned to the dreary small beach town where her family lived when her father drowned in open water, which she recalls in images of silvery tails. Halen also finds fire tingling beneath her touch and goes to school with earplugs in to block the overwhelming sensory input of the world around her. Of course, the run-in with mermaids some six years earlier was nothing compared to the drama ignited when she reencounters them after a mysterious young man shows up on her front stoop.

Early on, Halen passes out during a math test because she took out her ear plugs, and this moment sets the stage for the balancing act between her strengths and weaknesses throughout Coral & Bone. Again and again, her abilities push her over the edge, and again and again, she finds herself diminished by them. At times the wording felt ableist. Halen frequently questions her sanity toward the beginning, and yes, I imagine anyone being pulled from the mundane world into a realm with different rules and different beings might question their sanity, or at least struggle with disbelief. However, the frequency of "crazy" and "insane" statements detracted from the meaning of the words, because they felt like they were being used too liberally, and in place of words that better conveyed the context. Was it insane or was it disorienting? A touch more nuance would have been nice.

That said, Coral & Bone was full of delightful surprises- even the predictable parts surprised me. Sure, we all see them coming, but they unfold in subtly different ways, and it feels good to read the well foreshadowed event with the tiny little twist. Duane used foreshadowing well. I like that Halen was set up to be a bit of a swooning Bella, easily overwhelmed, easily captured, easily led along, despite obvious personal power, but then BAM- she makes choices without equivocation and sets her own destiny like a boss. I like Halen, unusual name, myriad personal quirks and all.

I also enjoyed Tiffany Duane's world building. There's a great amount of detail. While she's created a robust world filled with a magic system that relies on strict rules, there's a lot of room for expansion in subsequent books, and to date no flagrant ignoring of the rules constructed, so as to maintain the willing suspension of disbelief throughout the story. Coral & Bone also does this neat cross-genre thing. Yes, it's a paranormal questy fantasy with a romantic angle thrown into the mix, but the underlying story is invariably one about political issues and social justice. The ever present "destroy the bad guy, save the realms" element serves to illuminate the greater problem -- that Elosians truly believe in genocide as a route to national and personal security. The social justice issues dominate the landscape of the story, and make for an interesting tale.

All in all, I'm glad I read it, and now I just want to go swim and contemplate where Duane left off, and all the places she might take the story in the future.

SYNOPSIS:
Halen knows the sparks igniting under her fingertips are dangerous. She has spent her entire life trying to quell the tingly feelings that make her destroy things, but now that she is back in Rockaway Beach, where she watched her father drown, the flames have become impossible to tame.

Halen is trying to hold on, but when she is thrust into a mysterious new world, the underwater realm of Elosia, she unravels the secrets of her past and can’t help but ignite. As she explores Elosia, she realizes her life has been a lie. And when those who have deceived her come to her for help, Halen must choose—walk away or unleash the magick that could destroy them all. 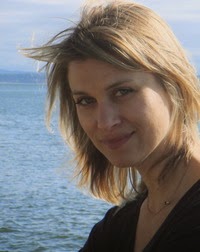 I write stories about magick, love and dark creatures lurking in the shadows. When I'm not lost in Edit Land you can find me reading a book from my towering TBR pile or at the movie theater nibbling licorice. I don't have a lucky number, but my favorite time is 11:11. I completely believe that the fortunes found inside cookies will come true and that you must be careful when wishing on stars. I live on an island, so if you want to visit you'll need a boat, and if you want to survive the passage, be sure to bring candy for the mermaids.

Check out the giveaway below for a chance to win an Amazon gift card.
a Rafflecopter giveaway

Posted by Slee at 7:00 am
Email ThisBlogThis!Share to TwitterShare to FacebookShare to Pinterest
Labels: Coral and Bone, fitting in, mermaids, reviews, social justice, Tiffany Duane, Xpresso Book Tours, YA Fantasy

Great review, Sandra! This tour has definitely made me want to read this one it sounds so imaginative and the wold sounds so pretty!!