Today we're taking part in the VIOLET STORM blog tour by sharing an excerpt from the book. Check it out! 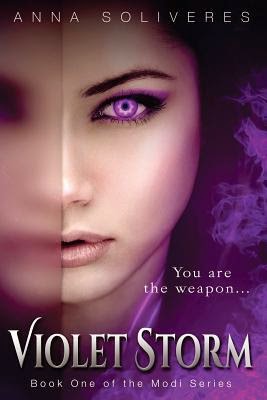 Several hundred years into the future, The Cleansing, known to some as the End of Days, forced the government to create Arks to shelter its people. When Earth became habitable again, new territories rose up from the ashes: Agria, the City of Light, and the Outer Boundaries. For a while, they lived in peace.

A brilliant surgeon known for his invention of Modi’s—the only cure for the deadly disease, vaincre—has gone rogue with his experiments, and the Monarchy is desperate to shut him down. That’s where Aeva Storm comes in, a champion athlete with an ego to match. Aeva is the surgeon’s secret weapon against the Monarchy. And they’ll never know what hit them. After reconstructing her body to become a Modi unlike any he’s ever created, Aeva is forced into a fight against all odds. She’ll have to break loyalties, hurt family, and turn her back on newly awakened love. Thousands of lives hang in the balance in a battle that will set forth a new era.

Join Aeva on her quest to see whether she’s got what it takes to go up against the most powerful humans ever created.


“Are you okay?” I start to inch toward him. Maybe something hurts badly and he’s just being too big of a man to admit it.
He raises a halting hand. “Let me finish. What I’m trying to say is you’re obviously well put together. You look… I mean, you know…ugh, forget it.” He turns away giving me only his cheek, now the color of ripe crimson, to stare at.
“That’s okay. Honestly, I don’t want to know.” The last thing I want to hear is how disturbed he is by my face. For some reason it matters. I don’t want him to think of me as ugly.
“Oh, I bet you don’t,” he says. “You don’t seem the type.”
I release an exaggerated breath of patience. “So now I’m a type?” It’s like trying to make sense out of a child’s rambling.
“You know what I’m talking about, don’t you?” Those gold-rimmed eyes cut back to me, except this time his gaze roams over me with slow, lingering deliberation.
The air I was in the middle of breathing catches in my throat. There it is again…the desire I have never seen directed at me with such acuteness. Fear, yes. But desire? No one’s ever spared so much as a second glance. I’m Aeva Storm, known most prominently as “The Hellstorm,” a Fila champion, whose grace and beauty were only ever on the Fila field. The only emotion people felt for me besides reverence and fear, was jealousy.
“What nonsense are you talking about now?” I ask, slightly breathless.
Something in Karth changes again. His expression becomes serene, eyes glowing, his movements languid and predatory. He surges from the fallen trunk, all confidence back in his strong, lean body. He walks right up to me, so close I have to tilt back to see his face. He leans down, whatever distance between us now gone.
My knees go a little weak, lips pursing tightly to suppress their sudden trembling. I turn away, not wanting him to see the unfamiliar fear in my eyes, but I can still feel the breath from his lips caressing my cheek.
He says the next words quietly, “I said, you know what—”
“I heard you,” I whisper harshly. “And no. I don’t have a clue what you’re talking about.”
“Oh, sure…” He draws the word out, his voice husky. “But I’ve seen this all before.”
I turn back to him, frowning with confusion, feeling strangely hypnotized. This close, his long, luminous face is even more striking. A foreign sensation twists and tumbles in the lower region of my abdomen, clenching taut.
He smiles rather wolfishly, his canines looking somewhat sharper. “People like you…not who they’re pretending to be—not who they’re supposed to be.”
His words aren’t making any sense. But maybe that’s my fault, too flustered and unfocused by his nearness. My is body demanding so many inexplicable things that I can’t string even the simplest thoughts together.
“What’s coming out of your mouth doesn’t add up to what I’m seeing.”
“What?” Is all I can manage.
Karth reaches for me, trailing a long finger down the length of my cheek. Fire spreads from where he touches, briefly consuming all thought. I shiver, eyes drifting closed.
“Don’t think that I haven’t noticed,” he whispers, and I swear I can feel his lips brush against mine. “How a girl like you…”
My lips part, sucking in the caress of his soft breath, my body wanting so badly to see where this is all leading.
But then there is space, cold air where there was once warmth. “How a girl like you…” A hardness enters his tone, coated with an unsettling darkness. “Could have incredible hearing more attuned than my own. With the ability to see in pitch black as if it were light as day, who hasn’t eaten or drank a thing for a full day and night,” he adds with a chuckle. It held no warmth, no kindness, no mercy. “And let’s not forget, the ability to push a grown man several feet with the force of inhuman strength. Oh, yes…I’ve seen this all before.”
The excitement of his touch evaporates. His words are no longer lost on me. It all comes back, and this time with unfailing clarity.
Karth’s voice is like the first chill of winters’ kiss. “So I’ll ask you one last time, who are you?”
Slowly, I raise my gaze to Karth’s. His eyes no longer show desire. No. They look as empty and as detached as they had when he’d killed Jervis. 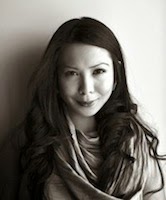 AUTHOR BIO
Anna Soliveres has always been a storyteller but it wasn’t until her early twenties when she began writing novel length works. The result was an enthusiasm to get better at the craft until her work could be shared with the world. Releasing in March 2014, VIOLET STORM is her debut novel. Anna is currently working on another young adult sci-fi series, titled SNOW DOLLS, set to release in late 2014. To learn more, please visit her at www.annasoliveres.com.

A hearty thanks from me as well, Dorothy! :)

Did you know you can create short urls with AdFly and get money from every visitor to your short urls.