Today we're taking part in the PREDATOR blog tour by chatting with author Janice Gable Bashman. Pull up a chair and get to know Janice and her book.


Hi, Janice! Welcome to We Do Write. Tell us a bit about yourself.

I am the Bram Stoker nominated author of PREDATOR (Month9Books 2014) and WANTED UNDEAD OR ALIVE (w/NEW YORK TIMES bestseller Jonathan Maberry) (Citadel Press 2010). I am editor of THE BIG THRILL (International Thriller Writers’ magazine). My short fiction has been published in various anthologies and magazines. I am a member of the Society of Children’s Book Writers and Illustrators, Mystery Writers of America, Horror Writers Association, and the International Thriller Writers, where I serve on the board of directors as Vice President, Technology.

Tell our readers a bit about PREDATOR. 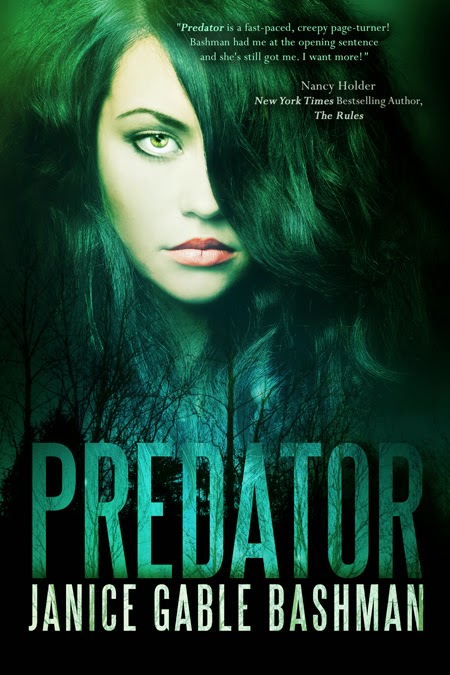 Sixteen-year-old Bree Sunderland must inject herself with an untested version of her father’s gene therapy to become a werewolf in order to stop a corrupt group of mercenaries from creating a team of unstoppable lycanthrope soldiers.

When Bree went with her scientist father to Ireland, she thought it would be a vacation to study bog bodies. She never expected to fall in love with a mysterious young Irishman and certainly never expected to become the kind of monster her father said only existed in nightmares.

Dr. Sunderland discovers that lycanthropy was not a supernatural curse but rather a genetic mutation. When they return home, her dad continues his research, but the military wants to turn that research into a bio weapons program and rogue soldiers want to steal the research to turn themselves into unstoppable killing machines. Bree’s boyfriend Liam surprises her with a visit to the United States, but there are darker surprises in store for both of them.

As evil forces hunt those she loves, Bree must become an even more dangerous hunter to save them all. Predator gives the werewolf legend a couple of new spins by introducing the Benandanti (an actual folkloric belief that certain families of Italy and Livonia were werewolves who fought against evil) as well as a modern scientific approach to mutation and the science of transgenics.

She will become the thing she hates, to protect those she loves!

I came across some articles on bog bodies and was fascinated by how the bodies were preserved and how the people died – most were murdered. I’ve always been interested in science and genetic engineering. And, I researched and wrote about werewolves in Wanted Undead or Alive, so it all naturally came together, with a lot of hard work of course.

Of course! Are you a plotter or a pantser?

I’m definitely a plotter. First I create an extensive outline of the book. Then I make a character list in a separate document. Once that is completed, I use a Post-it to represent each chapter by writing a brief description, chapter number, and main characters for the chapter on the Post-it. The Post-its are then placed sequentially onto a tri-fold science fair display board that stands on the floor of my office. This process gives me a visual feel for the novel and enables me to see its structure all at once. I can move the Post-its however I wish to see how things would look if I changed the ordering of the chapters. Of course, as I write the book, things change. So, although I’m a plotter, the book ends up different from my outline.

Sounds familiar. *wink* What’s the hardest part of writing for you?

For Predator it was making sure all the science was plausible within the plot of the book. Creating super soldiers had to have a scientific base that made sense. Making sure readers understood that science amid the high pace and high action was important. I gave readers only the information they needed and not a bit more so that the science didn’t drag down the story.

In general, it’s finding a title. I’m terrible at coming up with titles for my books, short stories, or articles. It takes me forever to find a good one. I could spend a year writing a book and just as long agonizing over the title.

I suck on mini jawbreakers while I write in the afternoons—I’m eating one now. I can pretty much write anywhere as long as I have my laptop or a pad of paper and a pencil, so I guess they’re must-haves.


Been there! If you could have any super power, what would it be?


I would want the ability to fly. But more importantly, I’d want a super power that would let me create peace throughout the world.


I don’t know if it’s the weirdest thing I’ve googled, but I googled how nanobots could control a lion. I needed the information for a short story I wrote (“Vibot”) for an anthology a few years ago.


Reading. I have a pile of books waiting to be read and am open to suggestions in any genre. I’m into photography and have been for as long as I can remember. I also love to travel. And spending time with my friends and family is very important to me.


Here’s the part where you thank the people who are supporting you. Let’s hear your shout outs.
There are so many people who work to support authors and I could probably spend all day naming those who support me. Here’s a big shout to my fellow Liar’s Club members (Jonathan Maberry, Kathryn Craft, Marie Lamba, Gregory Frost, Solomon Jones, Merry Jones, Kelly Simmons, Dennis Tafoya, Jon McGoran, and Cordelia Biddle). We’re a group of professional writers who do workshops, classes, and events in support of libraries, writers of all genres, bookstores, and literacy. I must also thank my fellow Weggie Writers (Donna Glanti, Lisa Papp, Kathryn Craft, Tori Bond, Karen Toz, and Linda Wisniewski). We meet every Wednesday at Wegman’s, set up our laptops and write whatever we each are working on. But we also support each other, personally and professionally. And, of course, thanks to my family, my agent, and my publisher, who are always on my side.

I must give a giant shout-out and thanks all the readers, bloggers, librarians, teachers, and everyone else who supports authors. I really appreciate it.