It's mid October and, believe it or not, Halloween is just around the corner. To get us in the mood, we thought we'd feature a novel that couldn't be more perfect, Dead New World by Ryan Hill. Have a look... 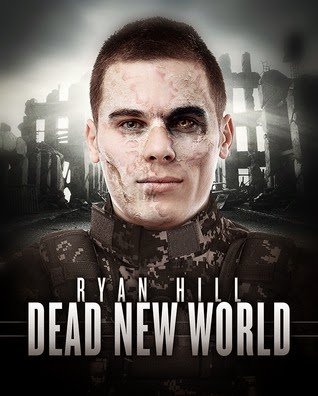 Before the world fell into chaos, the undead existed only in the imagination. Now, more of them walk the earth than living. Zombies move about freely, while humans entomb themselves inside concrete barricades to stay alive.

All that, while the leader of a powerful cult – known only as Reverend – becomes the next threat to the rebuilding United States. Believing zombies to be God’s latest creation, making humanity obsolete, he wants to give every man, woman, and child the chance to become one. With his combined army of humans and zombies, he may well get his wish.

Best friends Holt and Ambrose went up against the Reverend once. Holt lost a foot and a zombie bit Ambrose…though he survived the virus, only to become a human-zombie hybrid, reviled by the living and unwelcome among the dead. When the Reverend kidnaps the woman Holt loves, the race is on to save her from a fate worse than death.

Disgusted with myself, I let go of Nancy and walked, alone and with a heavy heart, to Ambrose’s room. I could see him through the window, asleep on a twin bed.

“Push the red button to talk into the microphone,” Nancy said.

I pressed the red button on the control panel next to the door. “Hey, man, wake up.”

Ambrose slowly stirred from his sleep. “Who is it?”

“Ha.” Ambrose stood, draping bed sheets over his white scrubs. The days of being stuck in this small room seemed to have sapped his strength. He leaned against the wall, too tired to stand on his own for long. “Nice to see you on your foot.”

“Funny. I could say the same for you. I hear you got one hell of a hickey. Didn’t your mother teach you to stay away from strangers?”

“I never did mind her like I should have.”

I tried to get a good look at him, but the lack of light made it impossible. “They said most people don’t last a day after being bitten. You’ve made it four. I guess I should congratulate you.” Surviving this awful disease longer than most. What a terrible silver lining. I bet he wished the virus would get it over with and turn him.

“Yeah, lucky me.” Ambrose coughed into his bed sheets. “Maybe they’ll give me a prize, like some bacon or something.”

Ambrose shrugged. “Kind of like being sick. Had a fever at first, then some numbness over part of my body.”

“Is it getting any worse?”

“No.” Ambrose sniffed. “Some parts still feel like me, others… like these gray parts, nothing.” He pointed at his arm where the skin had turned a sickly gray. “They’re dead, I guess.”

Nancy loudly cleared her throat. “We need to get you back to your room. They patrol this place pretty regularly, especially when we have… guests.”

I nodded to her, then turned my attention back to Ambrose. “I have to go. I’m sorry. I wish it was me in there, instead of you.”

Ambrose stepped up to the window. The light from the hallway revealed his face. For the first time, I got a glimpse of what his loyalty to me cost him. I froze, unable to take a breath for a long beat. One of his eyes remained normal, but the other took on that awful redness. Patches of dead skin were all over his face. The guilt rising up seemed almost too much to bear. What kind of hell had I sent my friend to?

Growing up, Ryan Hill used to spend his time reading and writing instead of doing homework. This resulted in an obsession with becoming a writer, but also a gross incompetence in the fields of science and mathematics. A graduate of North Carolina State University, Ryan has been a film critic for over five years. He lives in Raleigh, NC, with his dog/shadow Maggie. Ryan also feels strange about referring to himself in the third person.