Interview with Samantha Verant, Author of King of the Mutants

Today, we are so happy to have Samantha Verant here to answer questions about herself and her newest Middle Grade novel, King of the Mutants. Don't forget to enter the giveaway at the end of this post!

Hi, Samantha! Welcome to We Do Write. Tell us a bit about yourself.

A classically trained mezzo-soprano, at the age of fifteen I auditioned at The Chicago Academy for

the Performing and Visual Arts for voice, got in, but ended up choosing theater as my major. When my family moved to Boston the following year, I stayed involved in the acting community, but thanks to an awesome teacher, art became a big part of my life. A triple threat, I could sing, act (like a clown), and draw. But I couldn’t do all three things at once, or so I thought. Alas, once high school came to an end, it was on to Syracuse University, where I traded in arias and monologues for advertising design. After graduating from Syracuse with honors, I’ve worked at some of the biggest agencies in Chicago.


Over the years, I’ve traveled the world, lived in many places, and worked many jobs. I’ve had many successes, and a couple of failures — always on the search for the one thing that truly excited me. Then, one day, I finally found everything I’d been looking for: a passion for the written word. Thanks to writing, I can sing on the page, act out scenes, and design new worlds. I now live in southwestern France, where I’m married to a French rocket scientist...and writing wacky stories.

Tell our readers a bit about KING OF THE MUTANTS. 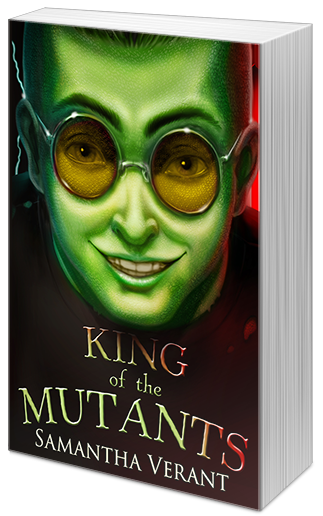 Maverick Mercury is the sideshow attraction known as “Gator Boy” at Grumbling’s Traveling Circus and Sideshow. Despite being routinely kicked around by the other performers, Maverick has always been comfortable in his skin. That is, until he overhears Burt Grumbling talking about him behind his reptilian-like back. Seems Maverick’s freakish mutations are the result of some billionaire geneticist’s experiments gone awry. Apparently, this guy kidnaps kids, turns them into supermutants, and sells their powers to the highest bidder. Now, Maverick is on a mission to find the mad scientist who may have created him. All he has to do is steal some wheels from Burt, escape the clutches of one-eyed Yorgi and his gang of killer clowns, and make his way from some Podunk town in Florida to the Big Apple.

Two stories influenced King of the Mutants. In my twenties, I read a book called Geek Love by Katherine Dunn, which has haunted me to this day. I’ve also always loved The Wizard of Oz. One morning, I woke up from a crazy dream. There was a circus, some very mean ‘munchkins,’ and a twelve-year-old mistreated sideshow (but sweet) attraction. Inspiration hit. Alas, King of the Mutants was born.

I’m half plotter, half panster. I don’t write an outline per se, but I do write down key plot points on Post-it notes and then arrange them in a chapter-like format. Then, I sit down at my trusty computer and write, letting the rest of the story unfold as it comes to me. I suppose there is a method to my madness. Mwa-ha-ha!

Lately, it’s been finding the time to write. This will change soon, though! I have three drafts begging for attention.

How much fun would it be to spread your wings and soar above the world like a bird? I’m going with flying. Whee! Care to join me?

Parasitic twins. It was book research, I swear! I went a little wacky in one scene in the book, scaring the pants off a few of my beta readers! This scene has now since been changed. There are no parasitic twins in King of the Mutants.

Finish this sentence: If I'm not writing, I'm probably ... on an adventure gathering material for my next book.

First off, I’d like to thank the awesome Georgia McBride, my publisher, for taking Maverick’s story from a crazy dream into a not-so-crazy reality. I am absolutely thrilled to be a part of the Month9/Tantrum Books family, where there is no dysfunction, just fun (and a whole lot of support)!

I’d like to thank my editor, Ashlyn Yuhas, who helped polish this story up one page at a time, and whose enthusiasm for Maverick’s story was contagious. Likewise, I’d like to thank the Month9Books team, with a special shout out to Jennifer Million, Candace Y., Jamie Arnold, Brooke Hamilton, and the amazingly talented illustrator that is Zachary Schoenbaum. (Seriously, what a cool cover!)
A heartfelt thanks goes to two amazing writers who believed in Maverick from the get-go and were with me on this entire publication journey. Angela Cerrito and Stephen Eastman, thank you for your critiques and for pushing me (and the story) onwards. It’s been a crazy ride!

Thank you to my beta readers Lisa Kelly Eason, Becky Wojahn, and Michael Morrel, who embraced the madness and delivered thoughtful critiques. A big hug goes to Kelly Polark and Carrie Harris, who cheered Mav on and urged me to bring back the tail! Well, thanks to everybody mentioned above, I did it. The tail? It’s back.