Today marks the launch of Suzanne Lazear's sequel in the Aether Chronicles, CHARMED VENGEANCE, published by Flux. Check it out! 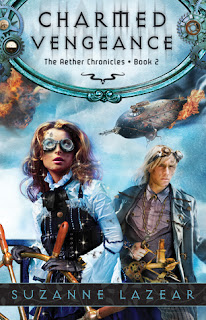 In the Faerie realm, Noli Braddock's relationship with her best friend V has grown into something more. But V's mother, Faerie Queen Tiana, has ruled that they are forbidden to see each other. Returning to the mortal realm, Noli joins the crew of her brother's air-pirate ship, the Vixen's Revenge. There she discovers that her brother has hired the scallywag Faerie huntsman, Kevighn Silver. While serving as shipmates, Kevighn and Noli learn that the Earth Court King plans to find a forbidden artifact--one that will bring destruction to everyone Noli loves.