Today I have the honor of interviewing a long time writer friend of mine, Stuart West. Stuart is the author of the Tex, the Witch Boy series. Having read the first two books, I can honestly say you've got to check them out!


Welcome to We Do Write, Stuart. Tell us a bit about yourself. 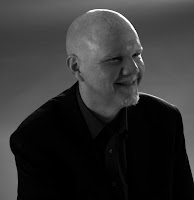 Hey, Dorothy, thanks for having me here. I slaved away in the corporate world as a graphic designer (A terrible one! Working at a terrible company!) for about 28 years. The stars aligned, the company collapsed, my wife is awesome, so I’m now a writer (hope I’m not as bad at writing as I was an artist). My wife’s a zillion times smarter than me—a professor of pharmacy—and my 21 year old daughter (look out!) is a zillion times prettier than me.

Two-and-a-half years. (I know it doesn’t sound impressive, so let’s break it down into “dog years.”…Eighteen years!)

LOL, that's a long time. ;) Tell us about the Tex series. What are the stories about? 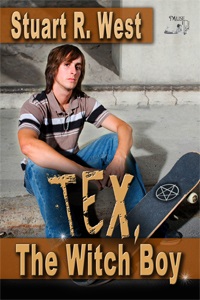 I suppose the Tex, The Witch Boy series can be described as a YA paranormal, suspense, mystery, comedic, dramatic catch-all. My “hero,” Tex, is a regular high school kid. The mantle of witchhood is thrust upon him through no choice of his own. Genetics, like acne. It also makes him a supernatural trouble magnet, stumbling into dangerous situations. There’s a serial killer picking off bullies in the first book.

But you know what really interests me? The awkward, painful, real memories of high school. And I’m writing about topical teen issues. The first book, Tex, The Witch Boy, is about bullying (practically a true story except for the witch stuff, natch). The second one, Tex And The Gangs Of Suburbia deals with high school violence and identity. The third (out in December) deals with religion, teen suicide, and gay lifestyles (I’m ambitious even if I don’t succeed!). 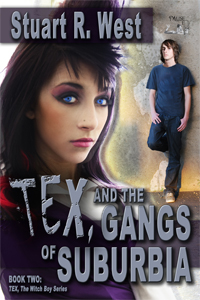 Dorothy, I remember being a teen all too well. No one (adults or writers) spoke to me, no one understood me, dang it (fists raised to the skies in my best drama-queen fashion)! It’s the kinda’ book I would’ve loved to have read back then. And my parents could’ve benefited from reading something like this. I’m exorcising high school demons and having a heckuva’ lotta’ fun doing it.

I have a few trusted writer/critique folks. But the best? Family members. ‘Cause they feed on your ego (Kidding! My wife’s as painful a critic as I’ve ever met.) I also have a fantastic editor through my primary publisher, MuseItUp, Tanja Cilia. Tanja, take a bow!

Hm. I do put on pants to plot. Can’t write a lick in my underwear.

LOL. What’s the hardest part of writing for you?

A beer. No. Six beers. No, wait, that’s not quite right. Water balloons to lob at the neighborhood kids. Yeah. Essential.

Hehehe, I can see that as a writing reward. If you could have any super power, what would it be?

Super incredible mind-reading powers. I’d be able to fathom the female mind in a single leap and not make them mad (I’m surrounded by women. Wife, daughter, mother, fellow female writers…my core group!). And I’d kinda’ like the power to turn into a rock if granted a second power. Only because I’ve always wondered what a rock thinks.

Animal tranquilizers, lock-picking, serial killer van sound-proofing. And that was just for fun! Then the serious research started…

Of course. ;) Quick writing test! Use the following words in a sentence: cryptic, taste, and languid.

The previously languid waiter leaned over and delivered a cryptic message, “The meatballs taste…strange.”

Very cool! Here’s the part where you thank the people who are supporting you. Let's hear your shout outs.

Cydney, my wife! Sarah, my daughter! Cybil, my split personality! Love you guys (except for Cybil, ‘cause that’s just not right).

And finally, where can people find you and your books online

Here’s the good news. On the MuseItUp Bookstore website, you can buy the first AND second Tex books for the price of one! Just for a while, though, I think.


Super special AmazeBalls Deal! Act fast, hit up the MuseItUp website, and you can buy both the Tex books for the price of one! My publisher's going cray-cray! But don't tell her and buy! Our lil' secret!http://museituppublishing.com/bookstore2/index.php?page=shop.product_details&flypage=flypage.tpl&product_id=759&category_id=281&manufacturer_id=277&option=com_virtuemart&Itemid=1
Tex, The Witch Boy on Amazon: (.99 Special!): http://www.amazon.com/Tex-The-Witch-Boy-ebook/dp/B00B3U5OWU/ref=sr_1_1?s=books&ie=UTF8&qid=1374849079&sr=1-1
Tex And The Gangs Of Suburbia on Amazon: http://www.amazon.com/Tex-Gangs-Suburbia-Witch-ebook/dp/B00E5RWBGA/ref=sr_1_1?s=books&ie=UTF8&qid=1374849134&sr=1-1&keywords=Tex+and+the+gangs+of+suburbia
BLOG: http://stuartrwest.blogspot.com/

TEX, THE WITCH BOY Trailer: https://www.youtube.com/watch?v=B6YA8yjNVMc
Posted by Dorothy Dreyer at 8:20 am
Email ThisBlogThis!Share to TwitterShare to FacebookShare to Pinterest
Labels: MuseItUp Publishing, Stuart West, Tex and the Gangs of Suburbia, Tex the Witch Boy, YA Paranormal Thriller